This chapter will be available soon as a downloadable PDF file.

This text is published under creative commons licensing, for referencing and adaptation, please click here.

Development of the first chemotherapy drug 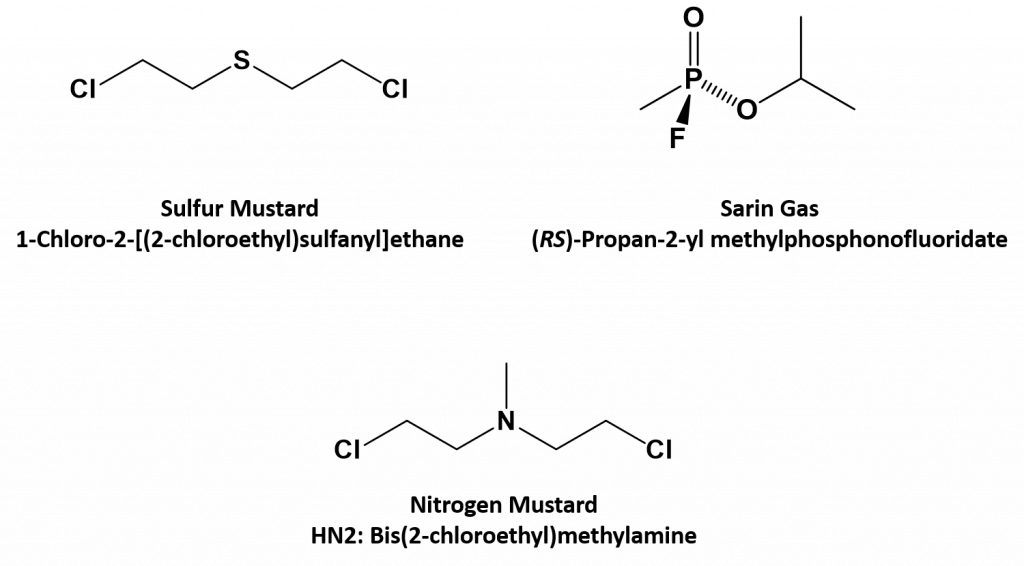 Sulfur mustard is the prototypical substance of the sulfur-based family of cytotoxic warfare agents which have the ability to form large blisters on exposed skin and in the lungs. Pure sulfur mustards are colorless, viscous liquids at room temperature. When used in impure form, such as warfare agents, they are usually yellow-brown and have an odor resembling mustard plants, garlic, or horseradish, hence the name. Sulfur mustard was originally assigned the name LOST, after the scientists Wilhelm Lommel and Wilhelm Steinkopf, who developed a method of large-scale production for the Imperial German Army in 1916.

Mustard agents are regulated under the 1993 Chemical Weapons Convention. Three classes of chemicals are monitored under this Convention, with sulfur and nitrogen mustard grouped in Schedule 1, as substances with no use other than in chemical warfare. Mustard agents could be deployed on the battlefield by means of artillery shells, aerial bombs, rockets, or by spraying from warplanes.

Figure 10.1 Use of Mustard Gas During World Wars I and II. A. US Army World War II Gas Identification Poster, ca. 1941–1945. B. Blisters on a human arm created by exposure to mustard gas.

Development of the first chemotherapy drug

As early as 1919 it was known that mustard agents supress hematopoiesis, or the formation of blood cells. In addition, autopsies performed on 75 soldiers who had died of mustard agent during World War I were done by researchers from the University of Pennsylvania who reported decreased counts of white blood cells. This led the American Office of Scientific Research and Development (OSRD) to finance the biology and chemistry departments at Yale University to conduct research on the use of chemical warfare during World War II. As a part of this effort, the group investigated nitrogen mustard as a therapy for Hodgkin’s lymphoma and other types of lymphoma and leukemia, and this compound was tried out on its first human patient in December 1942. The results of this study were not published until 1946, when they were declassified.  In a parallel track, after the air raid on Bari in December 1943, the doctors of the U.S. Army noted that white blood cell counts were reduced in their patients. Some years after World War II was over, the incident in Bari and the work of the Yale University group with nitrogen mustard converged, and this prompted a search for other similar chemical compounds. Due to its use in previous studies, the nitrogen mustard called “HN2”, later known as mustine, became the first cancer chemotherapy drug to be used. Mustine (HN2), is no longer commonly in use because of excessive toxicity.

Sarin is an organophosphate nerve agent. Like all other nerve agents, sarin attacks the nervous system by interfering with the degradation of the neurotransmitter acetylcholine at neuromuscular junctions. Death will usually occur as a result of asphyxia due to the inability to control the muscles involved in breathing function.

Initial symptoms following exposure to sarin are a runny nose, tightness in the chest and constriction of the pupils. Soon after, the person will have difficulty breathing and they will experience nausea and drooling. As they continue to lose control of bodily functions, they may vomit, defecate and urinate. This phase is followed by twitching and jerking. Ultimately, the person becomes comatose and suffocates in a series of convulsive spasms. Moreover, common mnemonics for the symptomatology of organophosphate poisoning, including sarin gas, are the “killer B’s” of bronchorrhea and bronchospasm because they are the leading cause of death, and SLUDGE – salivation, lacrimation, urination, defecation, gastrointestinal distress, and emesis. Death may follow in 1 to 10 minutes after direct inhalation.

Sarin has a high volatility (ease with which a liquid can turn into a gas) relative to similar nerve agents, therefore inhalation can be very dangerous and even vapor concentrations may immediately penetrate the skin. A person’s clothing can release sarin for about 30 minutes after it has come in contact with sarin gas, which can lead to exposure of other people. Production and stockpiling of sarin was outlawed as of April 1997 by the Chemical Weapons Convention of 1993, and it is classified as a Schedule 1 substance. The suspected use of sarin in recent bombing attacks in Syria remains a controversial topic in global politics.

Oxygen is the most common and plentiful heteroatom found in organic molecules and is a constituent of all the major macromolecules found in the human body (proteins, carbohydrates, fats/lipids, and nucleic acids). In addition to oxygen, sulfur, phosphorous and nitrogen are also common heteroatoms that have special roles in biological systems.  Nitrogen is a key component in proteins and phosphorous is found in deoxyribonucleic acid (DNA), and ribonucleic acid (RNA). Sulfur is found in more limited quantities in protein, as well as in many other small molecules found in the human body, including several vitamins.  Sulfur-containing organic compounds are also required for the biosynthesis of many chemical signaling molecules such as hormones and neurotransmitters. Thus, this chapter will focus on organic functional groups and the associated chemical reactions associated with nitrogen, sulfur, and phosphorus containing molecules.

Because sulfur is in the same group (6A) of the periodic table as oxygen, the two elements have some similar properties. We might expect sulfur to form organic compounds related to those of oxygen, and indeed it does. Thiols (also called mercaptans), are sulfur analogs of alcohols and have the general formula R-SH. For example, methanethiol (also called methyl mercaptan), has the formula CH3SH. Ethanethiol (ethyl mercaptan or CH3CH2SH) is the most common odorant for liquid propane (LP) gas. Its structure parallels that of ethanol, but with sulfur in place of oxygen. The odor of CH3CH2SH is infamous. Ethanethiol is more volatile than ethanol due to a diminished ability to engage in hydrogen bonding. Ethanethiol is toxic. It occurs naturally as a minor component of petroleum, and is commonly added to otherwise odorless gaseous products such as liquefied petroleum gas (LPG), at very low doses, to help warn of gas leaks. At these concentrations, ethanethiol is not harmful.

Thiols can undergo mild oxidation to produce compounds called disulfides. This type of reaction is common in protein structures where it forms intramolecular disulfide bridge structures. The amino acids cysteine [HSCH2CH(NH2)COOH] and methionine [CH3SCH2CH2CH(NH2)COOH] contain sulfur atoms, as do all proteins that contain these amino acids. Disulfide linkages (–S–S–) between protein chains are extremely important in protein structure.

Figure 10.2 The formation of disulfides from thiol structures. A. depicts a generic equation for the formation of a disulfide from two thiol molecules.  Note that during this reaction an oxidizing reagent is required to remove 2 hydrogens and 2 electrons from the thiol structures in order to form the oxidized disulfide product. B. Shows two cysteine amino acids that have formed a disulfide bond. C. When cysteine occurs in protein sequences it can react with other cysteine residues within the structure and form internal protein structures called disulfide bridges.  Disulfide bridges are important in maintaining the correct 3-dimentional structure, and thus, the overall function of proteins within biological systems.

Depiction of disulfide protein bridges in C, provided by: Jü

Disulfide Bonds in Hair and Feathers – A Closer Look

Over 90% of the dry weight of hair comprises proteins called keratins, which have a high disulfide content, from the amino acid cysteine. 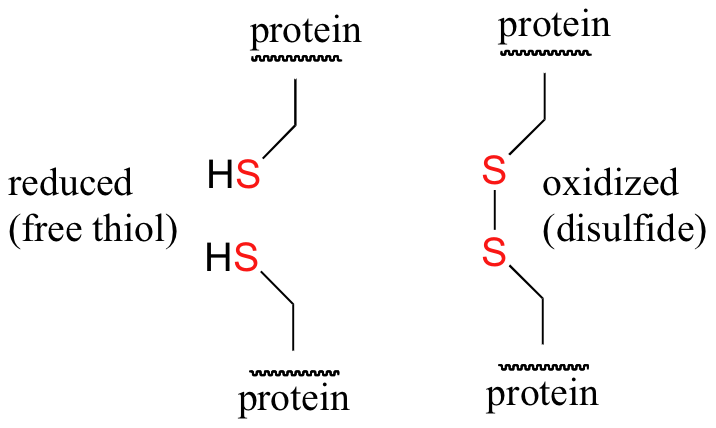 The robustness conferred in part by disulfide linkages is illustrated by the recovery of virtually intact hair from ancient Egyptian tombs. Feathers have similar keratins and are extremely resistant to protein digestive enzymes. Different parts of the hair and feather have different cysteine levels, leading to harder or softer material. Manipulating disulfide bonds in hair is the basis for the permanent wave in hairstyling. Reagents that affect the making and breaking of S–S bonds are key, e.g., ammonium thioglycolate. The high disulfide content of feathers dictates the high sulfur content of bird eggs. The high sulfur content of hair and feathers contributes to the disagreeable odor that results when they are burned.

Figure 10.3 The importance of disulfide bridges. Disulfide bonds are highly abundant in hair and feathers. A. Depicts a 200X magnification of a human hair. B. Shows the structure of a feather without any coloration. C. Shows a permanent hair-style.

In the hair protein, keratin, disulfide bonds are formed by oxidation of the sulfhydryl groups on cysteine. Different protein chains or loops within a single chain are held together by the strong covalent disulfide bonds.  In the permanent wave process, a basic reducing substance (usually ammonium thioglycolate) is first added to reduce and disrupt the disulfide cross-links.

Figure 10.4 First Step in Receiving a Permanent Hair Treatment.  The hair is first rolled tight onto curlers. The first reagent, a basic reducing agent is then added to the hair. The reducing agent disrupts the disulfide bonds in the keratin hair proteins, allowing the folding pattern of the keratin to shift and accommodate the curled hair structure.

To stabilize the hair in the new position an oxidizing agent, usually a dilute solution of hydrogen peroxide, (also called the neutralizer) is added to reform the disulfide bonds in their new positions. The permanent will hold these new disulfide bond positions until the hair grows out. The new hair growth has not been treated and will thus, adopt it’s natural disulfide bond structure.

Figure 10.5 Second Step in a Permanent Hair Treatment.  After treatment of the curled hair with the reducing agent. An oxidizing agent is added to the hair to reform the disulfide bridges while the hair is in the curled position. Upon unrolling the hair, the hair will now retain the curly conformation due to the formation of the new disulfide bridges.

Thioethers, which are sulfur analogs of ethers, have the form general formula RSR′. The sulfur mustard in the opening essay is an example of a thioether.  A similar, but nontoxic thioether is dimethylsulfide (CH3SCH3), which is responsible for the sometimes unpleasant odor of cooking cabbage and related vegetables.

Similar to alcohols, thiols can also react with carboxylic acids in a dehydration reaction to form an ester structure.  In this case, the -OH group from the carboxylic acid acts as a leaving group following the nucleophilic attack of the sulfur at the carbonyl carbon. The resulting product is called a thioester. The general structure of a thioester is shown below:

The dehydration reaction needed to form a thioester is shown below:

The formation of thioesters are very important in biological systems, especially with regards to fat metabolism.  Long chain fatty acids cannot be carried through the cell as a free fatty acid.  The carboxylic acid structure would be damaging to the integrity of the cell membrane.  Thus, fatty acids are shuttled safely within the cell as a thioester with an important organic molecule known as coenzyme A.  The structure of coenzyme A is quite large and complex. However, the important active component is the key thiol group indicated with the arrow.

When your food (carbohydrate and fat) is broken down in your body, it is eventually converted to a simple two-carbon unit called acetyl CoA, which is essentially a thioester derivative of acetic acid:

Acetyl-CoA is then utilized in a complex metabolic cycle, called the Kreb Cycle, to produce large quantities of Adenosine Triphosphate (ATP). ATP is the main source of energy that keeps your cells alive and functioning.

Thiols, disulfides, thioethers, and thioesters are common in biological compounds.