How HEXS professors are using comic books to teach health

HEXS professors share their experiences using comics as a teaching tool and presenting their ideas at San Diego Comic-Con.

The overlap of health and comics may not be immediately obvious, but for HEXS professors Eric Bruce, Shawn Sellers, Janet Roberts, and Dr. Emily Lilo, comics have a growing potential to be used as an educational tool. “They actually have a name for it,” says Dr. Lilo, whose research focuses on health communication, “it’s called ‘edutainment’.”

As the name suggests, “edutainment” combines aspects of education and entertainment to improve learning by making it not just painless but also enjoyable. The team recently presented a poster on their ideas at San Diego Comic-Con. In fact, this was the sixth year of HEXS professors presenting on health education and comics at the conference. According to Professor Shawn Sellers, presenting at a conference that’s focused on comics rather than health has its benefits.

The fact that it’s more of a general population gives us the opportunity to share the health message with a broader audience who otherwise maybe wouldn’t hear it.

Dr. Lilo adds that it’s not just for teachers, but for anyone trying to engage youth. “I talked to 2 social workers, a therapist and a school counselor who stopped by our poster, in addition to several educators.”The health message the group presents varies each year, Professor Janet Roberts explains.

For example, one year we talked about how if Batman were a real person, he would be in trouble chronic disease wise. He’s up all night and has a stressful job. Plus, there are no parks in Gotham city so there are environmental factors to consider.

The initial idea to use comics to teach health at WOU was the brainchild of Professor Eric Bruce, who joins in for a discussion around the benefits of using comics in the classroom, his experiences at Comic-Con, and thoughts on future directions of comics research.

When did you think to use comics in your teaching? How did students react?

Eric Bruce: Back in 2008, I taught Motor Learning for one term and I started feeling that I needed to better connect with the students. I’d been hiding the whole nerd/geek thing, but I thought, I’m going to go for it.

I used a few different superheroes and horror movies throughout the term to illustrate various health concepts. At first, the students were a little like “whoa, this is different,” but then they were getting it and understanding the material better. I also think I’ve become more comfortable in the classroom when I’m able to link the health concepts to the characters and the students seem more comfortable too.

You mentioned the whole “nerd/geek thing,” does that mean you’ve always liked comic books? What was it that got you interested?

Yeah, so growing up and enjoying movies and action movies and then building Legos and playing with action figures and then instead of that action figure being so and so from GI Joe, it was Superman. As I got older, I actually got to read the stories and watch the movies that I got the toys for. So it’s always been a part of my life.

My family always encouraged me to follow your passion and people will see it – whatever you’re doing in your career, people will be more likely to buy into whatever it is you’re selling. And in this world where we’re selling health behavior, if I’m more comfortable sharing with my comics and pop culture, then I’m better able to reach people.

How did you end up presenting this idea of using comics to promote health at Comic-Con?

In 2010, I went to San Diego comic-con and I saw a panel about Batman. I walked in to check it out and ended up talking with Dr. Travis Langley from Henderson State University, who is one of the founding members of the conference. He explained that it’s a multidisciplinary conference focused on comics research and comic studies. So you have this academic conference housed inside probably the Super Bowl of comic book conventions.

I thought, you know, this is good and Dr. Langley said “you should send us something next year.” Well I didn’t. I waited until the following year, but then got accepted and went down to present on Batman and the biopsychosocial model of disease. Shawn and Janet got involved in 2014 and now we’ve brought Dr. Lilo into it and she came down this year to present.

Ah, okay. So you’re presenting at an academic conference that’s going on at Comic-Con? What’s that like?

Yeah, so it’s called the Comic Arts Conference and it runs all 4 days of Comic-Con. Comic-Con itself is huge. There are approximately 135,000 attendees, plus 15,000-20,000 workers – people that are volunteering or they have tables – inside the convention center and it also spills outside the convention center. Those 135,000 tickets usually go in 30 minutes and so you’ve got some dedicated people that want to be there.

Obviously, we haven’t had 135,000 people show up to our poster – the room couldn’t hold that – but there’s something for everybody. It’s quite crazy. It’s sensory overload.

Wow, sounds intense. What was the theme or character for this year?

This year really ended up being quite the collaborative idea. It started with me looking in one direction and then Dr. Lilo took it one way, Shawn, and Janet took it another way, and it all came back around and we agreed on one thing to focus on. The final title of our poster was “Not Just Heroines vs. Villains – It’s Complicated: Engaging Teens in Positive Youth Development Through Superheroes.”

The idea is that whether someone becomes a hero or a villain depends on their back story and there are health risk behaviors where a character can go and become a villain or a hero. We looked at those health factors with different villains and then shared it as a lesson plan. The lesson plan is the “so what” moment that we’ve done with all the projects – here’s how you would use this in the classroom to teach healthier relationships, or decrease heart disease, or something like that. And that’s worked pretty well. People are curious.

Your posters and ideas have been pretty well received then?

Very well. When I first started, about 20 people showed up to the poster and this year it was easily over 60. I ran out of copies of materials to hand out. So we’re getting more popular. Because as the popularity of the movies and tv shows increase, more people are thinking, okay, how do I do this? How can I address this in an educational format?

Going forward, do you have some grand plan for where you see this going?

I know that folks have poked at me to put some things down in a book, but I’m not sure about that yet. I like to be involved in panels when I have the time, but I do love the poster aspect of it. Yeah, I always have an idea – there’s always something that’s popped up and then I’ll share it with Shawn and Janet and now Dr. Lilo.

It’s been wonderful getting lots of opinions and then also learning from them. It’s been a highlight to have those conversations and then I say, okay, here’s the nerd stuff to go with it.

The College of Education Receives a Grant to Support Students, Families, and Educators 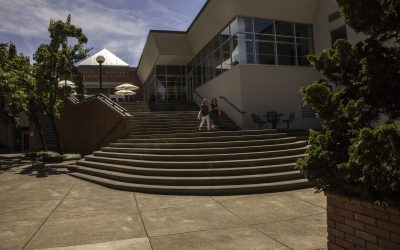 The College of Education Offers a New Undergraduate Program