Home » How We Learn Here

How We Learn Here

Here at the Politics, Policy and Administration Department of Western Oregon University, we value many different learning styles. Our professors work hard to incorporate different presentations, simulations, exercises, and activities into the traditional lecture format in order to create the best learning environment possible for our students. Check out some examples of our diverse classroom activities to see for yourself why WOU is the right choice for you!

“I divide the class into four teams, naming them Union Team 1, Union Team 2, Management Team 1 and Management Team 2. Each team will have about four to five members as the class tends to attract about twenty or so students. The two Teams 1 are matched against one another, while the Teams 2 are also matched against one another. Each team is considered to be a collective bargaining team, and their goal is to negotiate a collective bargaining agreement. The union represents the Sanitation Workers Union and negotiates on behalf of 75 trash collectors. The management team represents the city government. There are three issues to be negotiated — salary, health insurance for both workers and their families, and paid vacation time. After establishing the teams, I have the students assume different roles such as chief negotiator, who is a person who speaks for the team; a salary specialist, a health care specialist, a recorder, and a finance person who calculates the costs of various proposals. Each team develops its proposals, crafts a negotiating strategy, and learns how to make deals in order to accomplish what they seek. The union team is to get as much as possible without forcing layoffs, while the management seeks to keep city costs down and avoid a strike. The students then write a five page paper on their experiences. The simulation itself lasts for about two and a half weeks.” – Dr. Dover

“This class explored a range of political and philosophical writings about humanity’s relationship with the natural world and considered the diverse perspectives and beliefs people and groups have towards issues such as public lands, climate change, and animal rights.  Students created these movies as an effort to explore the issues and the parties involved in them, and to consider how we communicate and engage in environmental disputes. These were not a major part of the grading, but a chance for students to explore communicating in media other writing and traditional class presentations.” – Dr. Henkels

Here are some examples of the student projects: 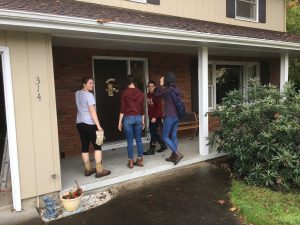 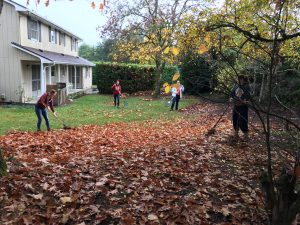 PS 425 “Native American Politics and Policy” is a wide-ranging course that seeks to introduce students to the legal, political, and (in a limited way) cultural context of Indian Country. A key element in this course is the extensive use of guest speakers and film so that the students see and directly discuss the complexity and richness of the Native American political context. One of the co-teachers is Justin Martin, owner of Perseverance Strategies, a lobbying firm in Salem which includes the Grand Ronde tribe as a client.  Mr. Martin is a Grand Ronde tribal member as well.

One of the many guest speakers from this course was Roben Itchoak.

Roben Itchoak was born in the Nome, Alaska area to a native family and grew up with direct connections and experiences with the old ways.  She is a graduate of Western Oregon University in the Public Policy and Administration program and completing her Masters in Planning, Public Policy and Management.  Her final MA project examines models for adaptation to climate change in Arctic communities.

Her presentation from this course is featured below: