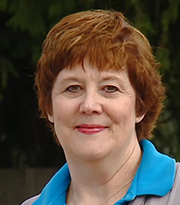 Cecelia ‘Cec’ Koontz has served WOU’s Monmouth community as a city councilor from 2010-2014, treasurer for the Monmouth‐Independence Community Foundation, member of the Finance Committee of the Monmouth‐Independence Chamber of Commerce, and currently serves as city mayor. She has also served on the Monmouth Economic Development Commission and as a panelist for the Oregon Arts Commission/Oregon Cultural Trust Grants programs. Koontz has served as president for organizations such as the Pentacle Theatre and the Children’s Education Theatre in Salem. In 2012, she was named the Monmouth‐Independence Chamber of Commerce’s First Citizen for her outstanding service to her community. Koontz is the business manager for the Central School District. She obtained a bachelor’s degree in economics from the University of Puget Sound in Tacoma, Wash.