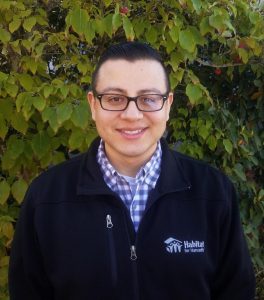 Executive Director, Habitat for Humanity of the Mid-Willamette Valley

Jerry Ambris is the executive director for Habitat for Humanity of the Mid-Willamette Valley. He started at the North Willamette Valley Habitat for Humanity in 2009 as its executive director. Prior to that, he served as the director of housing development for Farmworker Housing Development Corporation. In addition to his role on WOU’s Board of Trustees, he is a board member for Habitat for Humanity of Oregon and Fair Housing Council of Oregon. He also is a member of Rotary Club of Salem and is a member of the Capitol Planning Commission for Oregon. Ambris is committed to seeing Western Oregon University become the first four-year public university in Oregon to achieve the Hispanic Serving Institution designation. Ambris is a WOU alum, having earned a bachelor’s degree with a double major in Speech and Communications and Spanish in 2004.