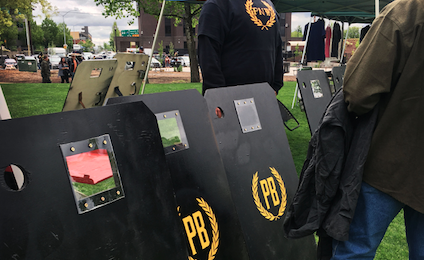 The Western Howl’s writing season and my time here as the News Editor are coming to an end. Over these last couple weeks, I’ve been reflecting on my first year of journalism ⏤ most notable, but not to disregard any of the other stories I’ve written, are the articles covering various gatherings and events at the Capitol. A joke in the office is that if you can’t find me, check the Capitol building.

I’ve attended rallies, protests and riots just like a lot of other Western students. Regardless of which side of the aisle organized the events, I can say I personally have been maced, mobbed and assaulted by the left and the right side.

Regardless of these experiences, I’ve been able to talk to people, and I think the most mind boggling thing for me is when I’m asked about the various articles I’ve written tackling these events. The interviewee I speak with is always shocked when they hear I’ve been verbally and physically assaulted by the side they stand with.

People who identify as standing on the left are often quick to point out the violence of the right, but there are instances where I was in the midst of a group of antifascists who set off a can of bear mace as other members of the movement paintballed a car with stickers corresponding to right wing ideologies. When I’ve gone to rallies designated as right wing events, I’ve been escorted out by people identifying as “Proud Boys.” At these rallies, they spend a lot of time judging and criticizing the left group, associating them with rioters and looters. However, there is no mention of instances where right wing groups have personally assaulted journalists or made threats on people’s lives.

I think another important point to make is that sweeping generalizations aren’t being made; at these events, there’s never just one or two sides that are present. You have a giant gumbo pot of beliefs that don’t always agree with each other. I’ve seen radical movements violently attack vehicles and people, while other protesters cry and beg for them to stop hurting people and causing damage. Sometimes there were mock “militias” that acted as security and were under orders of one person; if you fall on their radar, they will have that group swarm you and what they choose to do to you depends on who you are. Often, when I’ve had this happen to me I’ve tried to stand up for myself and verbally disarm them. There’s always one that is willing to listen in an unaggressive manner.

Since Jan. 6, the tension in Salem has been particularly palpable. Every weekend, there are different movements staking claims to particular areas of downtown. The police presence is noticeably dismal — until you have a group of people standing outside of the Capitol building. While you have cases of violence within various areas, the police have in some cases permitted  harassment and assault to be the standard at some of these events. I have literally run into an undercover cop posing as a gardener in a construction site, and after telling him that a group identifying as “Proud Boys” swarmed and assaulted me and my friend during a Second Amendment Rally during May Day, he said thank you and walked away.

The Salem police have made statements saying they don’t want to make the situation worse by adding a visible presence, so they send undercover agents; but, even after I reported what happened to us, we were left to our own devices. I later reported the harassment to police officers that showed up after the event was over and all they said was that they would make a report.

The point is, there are cases of violence all over and we can’t continue to use divisive language to argue which event was better or worse than the other. We can’t continue to have fierce party loyalties, as it’s only generated this atmosphere that creates enemies. Some veteran journalists who have actually gone to war zones have told me that what’s going on in our country is reminiscent of the experiences they’ve had. The most interesting part is that people are taking sides, but their beliefs don’t always align; it’s strictly party loyalty or party resentment.

The gap we have keeps growing wider and wider as time goes on. As blame is placed and fingers are pointed, we seem to choose to tune out each other’s voices. “If you’re not with us you’re against us” seems to be a running theme. But anger and hatred don’t have to be matched. We can lower the temperature and meet as equals, but I think in order to do that we can’t continuously point out others’ faults.

There has to be self acknowledgement that the political atmosphere has spiralled out of control and trying to throw water on an oil fire isn’t the solution. Explosive discussions are going to be our downfall if our views of the “other side” don’t change. I think we can all agree, where we are right now is not where any of us want to be.

Be the first to comment on "Opinion: Violence is not a one party problem"