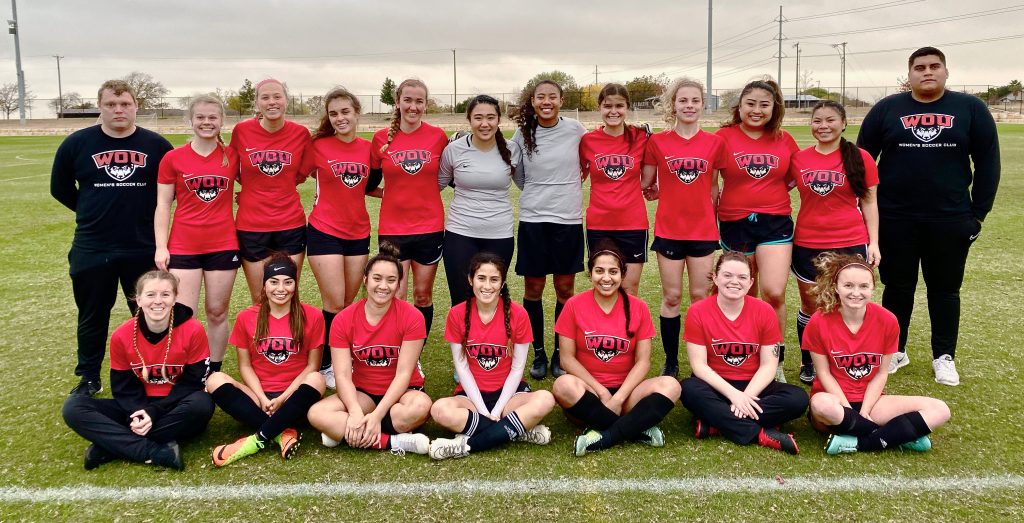 Women’s Club Soccer was selected to participate in the 2019 National and Recreational Sports Association tournament, in Round Rock, Texas — a first for the team and a huge step in advancing club sports and getting the Western Oregon name out there. The tournament took place during Nov. 21 through Nov. 22.

The journey began when the team left Monmouth and headed to the Portland airport to catch a flight down to California, and a second flight to Austin Texas. From 5 p.m. to almost 2 a.m. the Wolves traveled and made it safely to Round Rock. The time change is two hours ahead which definitely affected the team’s sleep and eating schedules — a few players had upset stomachs — but overall, they adjusted quickly.

The first day the team headed to the Round Rock Sports Complex to get their lactic acid out and get some touches on the ball before their games the next day.

A team dinner was held at famous Buca di Beppo, where the team shared a family meal consisting of lots of greens and lots of carbs — fueling them for the games to come.

Thursday morning at 8 a.m. was the starting moment for the National tournament and a long day for the team. This game the Wolves played against University of Iowa, a team they would never play during the regular season, and a team that definitely gave them a run for their money. They lost 4-0 — the Wolves made many opportunities with no completion. Wolves let the game go and rested for their next game.

The humidity and climate change played a huge role in how the team could perform, as well as having to travel for an entire day and regulate the time change.

The Wolves took on the University of Vermont Catamounts, another name for the American mountain lion.

Though tired from the game before, with little rest between the first and second game, the Wolves stepped on to the pitch ready and excited. Multiple injuries from the first game cost the Wolves with little to no subs, making the field players work until absolutely no more gas was in the tank.

It was a tough battle, with multiple players from the Catamounts playing dirty and hacking, the Wolves hung in and kept pushing. The first half of the match, the Wolves controlled and put extremely high pressure on the Catamounts defense, but had no luck in finding the back of the net.

Before the first half concluded the Catamounts finished a lucky and hard-to-reach goal, making the score 1-0.

The second half, the Wolves level of play dropped, having no more fuel to keep the fire going — especially with the Catamounts consistently subbing more than five players every five minutes — fresh legs for the Catamounts versus the tired and exhausted legs of the Wolves.

The game finished with no more goals from either team, but another loss for the Wolves.

Off the field and back at the hotel the team was feeling every ache and pain, icing and resting as much as they could before their final game on Friday — while also trying to finish school assignments. This posed to be quite difficult for multiple players due to being in a different state, sleeping schedules flipped upside down, being 100% exhausted from playing and being in the humidity and sun all day, traveling and all around having fun bonding and getting closer.

Friday, Nov. 22 was the final day for soccer for this women’s team. At 8 a.m., the team stepped onto the pitch and began their warm up to face Central Michigan University.

Whistles were being blown across the soccer complex, initiating the start of all the 8 a.m. games, and the final game of the NIRSA tournament for the Wolves.

The air was cold, the wind was rude and the clouds started to sprinkle the field and players with mist — this kept the Wolves on their toes and the subs cuddled together to stay warm.

Concentration and one goal in mind kept the Wolves playing fast and their pressure high — though legs were tired, knees were swollen and bruised, injuries held players out of the game, the team didn’t stop.

Western’s first goal sent adrenaline across the entire team — Kawehi Taniguchi, a returning senior, kicked a picturesque corner kick, where Haley Wilmott, a returning sophomore, was there to connect the ball to the back of the net, Wolves 1, Catamounts 0.

With the first half ending and the Wolves ahead, the momentum was at the feet of the Wolves going into their final half of their time in the tournament.

During the last 15 minutes the Catamounts returned the Wolves point with one of their own, after Seidree Kealoha-Albarado, a first year, fouled a Catamount and drew her first yellow card. Catamount player kicked the ball over the defensive line and fellow teammate slid to kick the ball into the Wolves goal, 1-1.

Before the final half came to a close, the Wolves popped away one last goal. Defender and left footer, Sydni Manuel, a first year, cleared the ball forward to have it bounce and go right past the Catamount’s goalkeeper — the final whistle blew and the Wolves won their first game of the tournament, 2-1.

Unfortunately, the team had no other scheduled games, but the overall chance to play against division one schools, some being five to ten times larger than Western, in Texas, was a once-in-a-lifetime opportunity.

“I loved getting to spend time and get to know my teammates better — traveling brings a team together because you are with them 24/7,” said Gha Ming Ng, a senior defender, about getting the chance to play alongside her teammates in nationals.