With each step, the sound of my feet on the leaves, the stems, and the bark
connected me to the path beneath me. It meant I was going somewhere. The scent of the air at dawn revived my spirit. The occasional winds that spread my hair across my face were like loving expressions of the human touch. The water, fresh, pure and clear, flowed through me with revival, like my baths in the river at night. Around the forest, the smell of wood, pine and dew emanated, while the murmur of streams reverberated the sounds of life on the long road behind and in front of me. At some point in the sky over the redwoods, at fixed times, there was a way to travel from here to there through reality.

In this place, nobody would run away from me. The crow, drawn to me, often
landed in my head. The squirrel, always curious, approached me in an attempt to steal the mixture of fruits, nuts, and seeds that left crumbs. The rooster, in love with me, ran behind me to stay close, scaring the squirrel from time to time.

In the moments I lay down, they touched me innocently, yet as only men were
supposed to. While running around me, the squirrel massaged me without intending to. While pecking the earth around me, the rooster occasionally played with my hair, which lay scattered everywhere. The crow, as always, landed upon me, usually on my breasts and with a soft grip, leaving behind the love bites left by a lover. In this society, I was accepted. I was welcome. I was home.

To relive that day when I arrived, my heart fills again with pain. Although it was a place where I would find myself repeatedly, I am not sure why I felt comfortable here. Was it to escape, to return here, to disappear completely or perhaps all of these? It is difficult to explain.

When alone, at night, under the sky illuminated by the stars, there is an
indescribable peace. When you look up, you can’t help being part of the view. I wish I had known about this secret place throughout my life; but it was only when I was really alone, with no one, that I realized its existence.

I remember, at school, my efforts to join my classmates’ cliques in the
playground or in the classroom and how they used to huddle up enough to keep me out. The squirrels in the trees were the ones that would come to me, trusting me because they knew I would always be alone.

I remember, in the house, instead of hugs, the lashes, and, to escape my
screams, they would quickly disperse, leaving the sound of crows scratching the windows.

I remember, in my work, my efforts to become the type of leader for whom others would give their lives. Due to the hidden body behind the costumes that covered us, the lack of the phallic would demote me, and my subordinates would rebel against me. Although I was not at war, I fought for those in my care, while my counterparts fought against me. The deafening sound of the lyrebirds at that time was like the ominous sounds of music behind the scenes. The last one to turn to, the only time a human being sought and requested my presence, was when they arrived at their juncture of life and death. And, like a magnet, attracted by their pleas for help, I was used as a tool of God for their miraculous recovery.

I remember that, as part of a public safety team, the very goodness of these
heroes attracted me to them. Only a small part, in my position I saved their lives, while in their position they saved others. And, one day, when the time came when I needed them, they left me behind. I had hoped to develop that common team bond in public safety, in the army. “I have your six.” “I would give my life for you.” But instead, I gave my life for me. And sadly, I remember the flight of the vultures.

A human being can only endure so much. Sadness overwhelmed my heart,
which was literally breaking apart. My very self, torn to pieces, leaked memories of my past.

The whiskey ghost was my rescue. He took me to places I always wanted to go.
Memory loss was replaced by euphoria. I was floating when I walked and felt I could fly, run and sing.

Near the end of my trip, all I had left was a virtual friend. I just wanted to be heard anonymously, so I secretly wrote my problems on the stoic worldwide web that returned my gaze without emotion.

– What do you need?
– A friend.
– Are you a veteran?
– Of course, and you must understand the loneliness with which we are
discharged.
– Do you have any support?
– I’m alone.
– Do you have suicidal thoughts?
– I just didn’t want to die alone.
– We don’t want you to die.
– That’s what people think they believe.
– What do you mean?
– In person, you wouldn’t be my friend.
– I do this as a living. Helping people is my call.
– Behind a computer?
– You are here.
– And when this conversation ends, this relationship also ends.
– Have you done anything to hurt yourself?
– I’m already starting to fade. I see the stars in the sky and they call me. I feel at
peace.
– Where are you?
– Somewhere out there.
– Please; Where are you?
– …

I woke up in the forest, surrounded by the crow, the squirrel and the rooster.
Although in the distance, the sound of the lyrebirds and the circle of vultures caught my attention, I was at peace near the river, where I removed the last barrier of humanity and entered, without disguise, into the waterfall next to the rocky hill. I was free, bathing in the nude, where nature appreciated my humanity. While the water ran through my nakedness, I felt no shame. I rid myself of my past life, and immediately, the wild loved me. I was no longer a virgin. My life had begun. The crow, happy to have me back,
landed upon my head as I finished my walk home.

Author’s Note: Sonia Aguirre was born and raised in El Paso, Texas, in a borderland community, across the Rio Grande River of Chihuahua, Juarez, Mexico. Her first language, Spanish, was the main language on both sides of
the border, though it was often a reason for punishment at school.
The US Border Patrol, in practice, frequently detained pedestrians in
search of illegal immigrants.  The youth of her generation often lost
or hid their culture; and, with their American evolution, lost their
accent, fluency, and comprehension of their native tongue.  A military
veteran, she has lived in 10 states and traveled through 34.  A
graduate of  the University of Mobile and College of the Siskiyous,
she currently majors in Spanish at Western Oregon University.

The early morning of November 9th came around and I checked Facebook to see who had become the president elect. Almost immediately, I saw “TRUMP: AMERICA’S NEW PRESIDENT” and I thought it was a joke. A sick joke, but definitely a joke. So I began to scan through my newsfeed and ultimately, it became very clear that it was not a joke.

I was angry, hurt, sad, scared, anxious, shocked…just to name a few. All of those emotions running through my veins before settling on one; numb.

If anyone has been bullied they know the feeling I am about to explain. It happens when you wake up to go to school and you know that Sydney will be waiting for you in the hall. You know that she will mock you and pick on you make your day a living hell so, to prepare, you shut down. You harden yourself. You blockade your heart and soul behind walls of impassivity so that whatever she does, she won’t hurt you, just your body.

I prepared for the worst.

I prayed to God that teachers just…stayed with their materials and didn’t bring it up.

I prepared for the racists to unite.

The next week, after he had won, I had finally taken a break from Facebook and sat in my room and cried.

I saw post of men getting in fights because of racial slurs. I read letters of white people threatening women of color, threatening Muslims, and men saying they were going to grab any women by the “pussy because Trump is president now and if can do it” they can do it too. My stomach still churns thinking about those posts.

A faculty member at Western Oregon University, stated that her niece was walking home from school when two white men, pulled up along her in a pickup truck and proceeded to ask her how much money she was going to pay toward the wall she was going to build. They then threw a couple dollars at her before driving away.

How did I not see that all of these people in my circle were low-key racists?

How is it possible that a man with no political background—a man who brags about molesting women, a man who inspires hate—become the President of the United States?

How did this happen?

I am angry that my sisters and brothers, nieces and nephews, and my best friends are now in fear for their lives, and that they’re not safe. I am angry that when I walked through campus on November 9th, 2016, we, as a community were quiet. WE WERE QUIET!

The other day a read a post about a fashion line planning to sale, and I quote “Brooks Middle Passages Slave Ship 1788 Mini Skirt by Daniel-Hagerman”. How is this okay?

This isn’t the America I know and love. 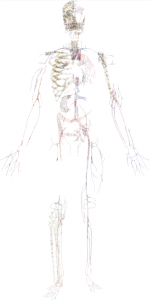 “The One is a map of the human anatomy, made of terms formed to look like parts of the body. The body is used here as a metaphor for inequalities in our society today. There is no hit to what race or gender The One is. The figure stands alone, pieces of it is taken away, showing the instability of our nation. With the issues surrounding us, we have to remember that we are a human race and we shouldn’t judge based on the color of our skin or our gender.”

turn the knife in deeper

as it scrapes the

that I have left

Say it with me: woman

One hundred years of fighting back

‘you’re one of those feminists, right?’

bigotry only regresses the nation.