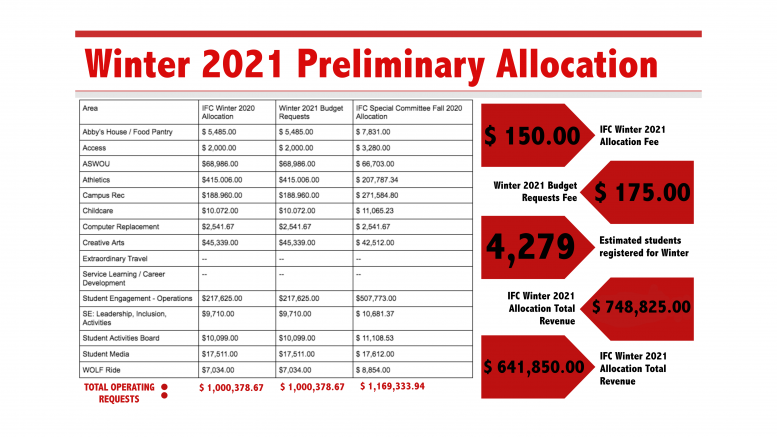 Over the course of several months, Western administration and the Incidental Fee Committee have been in debate over the IFC’s Incidental Fee.

For winter term, it was discussed in the committee’s Oct. 29 meeting that President Rex Fuller would potentially be supplying another $1 million stimulus from the online tech fee — similar to funding supplied in fall term. IFC members briefly discussed applying a flat rate fee of $25 in comparison to their current fee system: students with one to five credits pay $265, and students with more than six credits pay $395.

In their Nov. 5 meeting, the committee announced that President Fuller changed his $1 million offer to $415,000 on the condition that the committee does not attempt to make any mid-year fee modifications and maintains their two-tier system approved back in spring 2020.

In an email sent to ASWOU President NJ Johnson, President Fuller projected IFC expenses totaling $900,000 due to winter term being less expensive. Fuller cited that remaining funding for winter term would come from the $100,000 carryover from fall term, $85,000 from the current IFC fee and $300,000 from the $1.3 million in IFC reserves.

Despite Fuller’s conditions, the IFC has opted to carry out its normal governing processes — an extensive list — protected by OR statute 352.105.

“(There are) serious problems making our committee rely on online fee,” said junior philosophy English double major and IFC member Nick Denning in the fourth meeting transcripts. “No control over the amount of money we receive, administration is doing that all on their own and they decide what to charge and where money goes. All of a sudden we are reliant on online tech fees. (We) cannot criticize it because (our funding) will go away.”

Following their own timeline and deciding to not rely on Fuller, the IFC approved all preliminary budget proposals in their fifth meeting held on Nov. 12. Although the IFC requested areas to present budget proposal reflecting 50% funding, areas such as Student Media received an additional $1,500 to meet their needs, so they would not need to pull money from their reserves; Campus Recreation was given an additional $5,000 to increase workers to full time; Creative Arts received an additional $1,000 for student employment; ASWOU’s budget was given an additional $4,452 to allow Office Coordinator to be 1.0 FTE; Athletics requested funds for both winter and spring term in preparation for plane ticket purchases if travel is allowed.

Additionally, newly elected IFC Chair Makana Waikiki announced that although she attempted to request a Dec. 16 emergency meeting with the Board of Trustees, Chair Betty Komp did not reply to Waikiki. Instead, Komp only replied to ASWOU President Johnson, saying that she couldn’t endorse an emergency meeting.

At this time, due to the unwillingness of the Board of Trustees to meet with the IFC and President Fuller’s plans to withdraw funding if IFC continues its process, the committee intends to submit an appeal to the Higher Education Coordinating Commission to have the IFC’s situation discussed at their Dec. 10 boarding meeting. Until then, the IFC is continuing to the next phase of their fee establishment process: open hearings being held via Zoom on Nov. 19 from 9 a.m. to 11 a.m., and Nov. 20 from 10 a.m. to 12 p.m. During these hearings, members of the community can voice their concerns on fees or advocate for more funding in various areas. To participate in the hearings, visit https://wou.edu/ifc/.

As more information is released, the story will be updated.

What students need to know about current Oregon legislation

Honoring the experiences of BIPOC students across Oregon universities