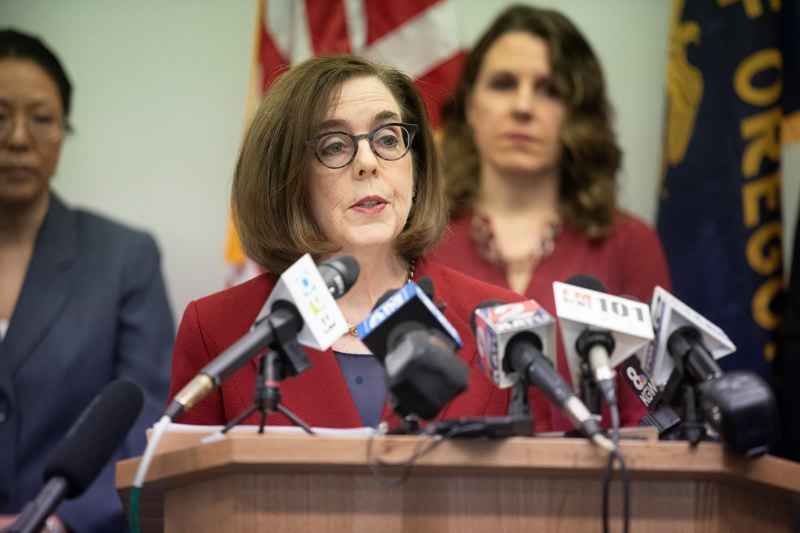 Governor Brown implores everyone to vote on Nov. 3 2020

Every day, young people like yourselves take action to better communities all across Oregon. Since becoming your Governor, I’ve worked with students who demand action on climate change by coming to the capitol and testifying in record numbers, making phone calls, and holding walk-outs on their campuses. I’ve held the hands of grieving students and their families in the wake of the Umpqua Community College shooting. I’ve seen college students put their lives on the line to fight wildfires. I’ve been humbled to see recent graduates enter the medical field so they can serve their communities in the midst of this global pandemic. And I’ve seen thousands gather across our state from Portland to Pendleton, Bend to Eugene, in a clarion call for racial justice.

You all are living, learning, and contributing to this state and this country. You will not just inherit this world – you are already actively building it.

I have also met countless young people who tell me they feel that this world is damaged beyond repair, and that the world’s problems are too big for any one of us to solve. And with the way 2020 has gone so far…I know the feeling.
I hear you when you say that you don’t feel represented in politics. I hear you when you say you’re afraid of what the future might hold.

While it’s true that I carry with me every single day the privilege of white skin and cisgender, I know what it’s like to be scared to go to work every day. Years ago, when I was a young lawyer, I was afraid of losing my job if someone discovered that I was in a relationship with a woman.

I know what it feels like to look over at the man in the office next to mine and know that he is treated differently. That he is paid more for the same position. Even though I knew I was doing a better job.

I’ve worked my entire career to make Oregon a more equitable and welcoming state to everyone who calls this place home. Our nation’s problems — racism, homophobia and transphobia, sexism, climate change, health care, immigration — are all addressed in major ways at the ballot box.

They’re addressed in your vote for President, members of Congress, Governor, and state legislators. They are also addressed by your vote for county sheriff, district attorneys, judges, city council, county clerks, bond measures, and local taxes.

This election will have big impacts on America, but also your local community. I hope a lot of people turn out and vote. We anticipate seeing record-breaking turnout across the country and here in Oregon.

It’s critical to have your voice heard. Whether your issue is gun reform, climate change, police reform, racial justice, or reproductive justice, your voice makes a difference.

So it’s time; the deadline to vote is Nov. 3. But, don’t wait — make a plan with your friends on how you’ll vote. It’s critical to get your ballot in early. Will you walk it to a drop box location? Will you mail it in the first week? Have you set a calendar reminder? I plan to vote early, and take advantage of Oregon’s paid postage to get my ballot to the county clerk.

I can’t say it enough: your vote is your voice. And every voice counts.

Be the first to comment on "Guest Opinion: Young voters: make a voting plan and follow through"