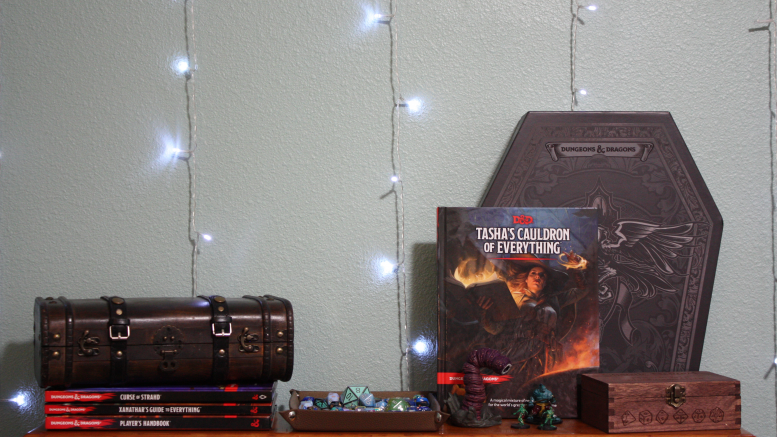 Out of all the sourcebooks that Wizards of the Coast has written, “Tasha’s Cauldron of Everything” is the best. This book is the newest in a series of Dungeons and Dragons sourcebooks that contain narrated passages from memorable characters in D&D lore. It first began with “Volo’s Guide to Monsters,” creating a reading atmosphere that made these characters more accessible and even playable. However, Tasha not only brings a female perspective into a male-dominated world, but also a charming personality that makes the reader feel like they’re scrolling through Tasha’s secret art Tumblr.

There are a bunch of new subclasses, making this book a secondary guide for dungeon masters and players alike. Alongside the “Player’s Handbook 5th Edition,” it bumps the character creation to a new level, and helps DM’s stuff a lot more tricks up their sleeve. Even though some information has been reprinted into this book, it doesn’t cause too much of a problem. Considering the limited respect towards homebrew material and the lack of acceptance of Unearthed Arcana, making anything canon with a big official D&D stamp is a step towards unlimited options.

With group patrons and the plethora of new spells, this book feels and reads like an actual guide, accompanying players through tons of optional class features. For someone that has been playing for years, it’s refreshing to create a ranger that doesn’t need to be a beast master (even though I still won’t ever play one).

For DM’s like myself, this sourcebook is a must-buy. It literally gives readers freebies with tons of puzzle options and magic items including magical tattoos. There is even an expanded set of rules for sidekicks that’ll provide entertaining twists at the table. The book also has official safeguards for DM’s regarding boundaries. From Tasha herself, “establish boundaries. And if anyone crosses them, speak up. If they don’t listen, there’s always cloudkill…”

Overall Review: This article reads like an advertisement for this book, and honestly, I would do it for Wizards of the Coast for free. 10/10 would recommend to players and DM’s alike!

Be the first to comment on "Dungeon Delving for Dummies: “Tasha’s Cauldron of Everything”"