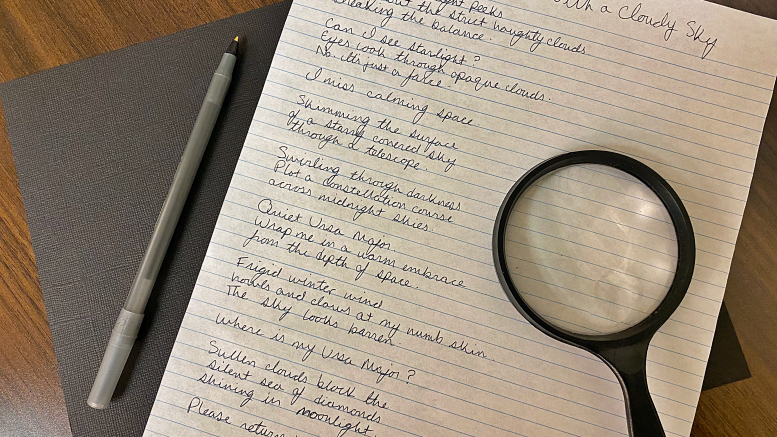 Sam Marshall first started writing poetry at 14; originally drawing inspiration from poets like Edgar Allen Poe, they moved on to experimenting with darker elements and themes in their own writing. The writing process isn’t always an easy one ⏤ and Marshall is no stranger to writer’s block ⏤ but after spending years of writing, revising and keeping old poems to reflect on, they were able to begin building a strong skill set.

As a young poet from Sherwood, OR, they learned to identify and try out different poetic devices in their works, such as stanza breaks, rhyme and meter. Now, as a senior at Western, they have taken their skills and enthusiasm for the writing process one step further.

Marshall is an English major with a concentration in literature and a writing minor, and they have utilized the writing skills they developed to good use. This determination earned them the position as editor-in-chief at The Northwest Passage, which is Western’s literary and fine arts magazine compiled of students’ work.

The latest issue of The Northwest Passage was released fall term, and Marshall gained a lot of valuable experience working with other students while curating it, saying, “I have to thank everyone who submitted their work to the magazine. There was a wide range of submissions, and I tried my best to highlight each individual work while creating a cohesive product that students can enjoy.”

Although most of their writing is private for now, they look forward to the possibility of publishing works one day. They recently wrote a poem called “Can’t Stargaze Under a Cloudy Sky,” which was inspired by their experiences while stargazing at the Big Dipper and finding comfort in the vast night sky. Given time, they learned what worked for their writer’s block and what didn’t, and found that the right words will come to the writer when they want to.

Marshall elaborates on their work when they were younger, stating, “[Edgar Allen] Poe is still one of my favorites … there’s substance in pain and melancholy, and I found it easier to write with those kinds of themes. I still write in that same vein of melancholy. I find it difficult to write anything happier than bittersweet.”

When they aren’t writing, Marshall can be found reading, rock climbing, finishing up online classes, listening to music and working on The Northwest Passage.

Spend some time with local vendors and businesses

Lookout for these fun activities on campus

Be the first to comment on "Artist Spotlight: WOU student and poet fuels the art scene"