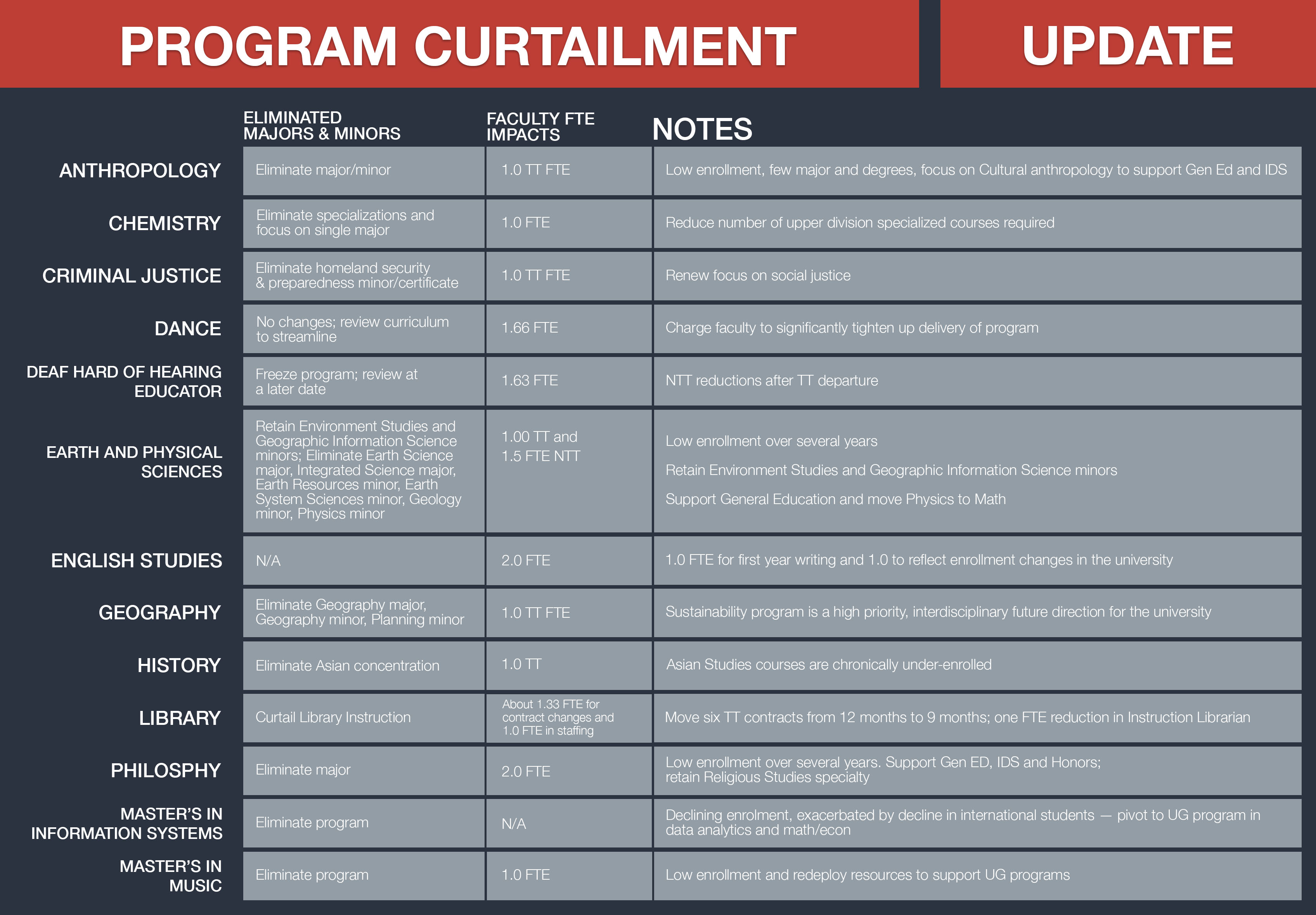 Beginning in 2011, the administration office began seeing lower enrollment rates at Western, resulting in financial challenges in the years following.

In spring 2020, COVID-19 accounted for 70% of the university’s 25% drop in enrollment. This resulted in the university asking the deans to propose two budgets to reduce salaries by 10% and 17% in June. In addition, all Cabinet members were asked to review budgets for FY21 and develop 10% and 17% cuts, based on salary.

When the task force began reviewing program curtailments, an extensive list of qualitative and quantitative factors were taken into account.

Additionally, the task force also utilized feedback from original reports from the deans, the recommendations from Western Oregon University’s Federation of Teachers, the recommendations from the Faculty Senate Executive Committee, PowerPoint for panel discussion, feedback from three faculty panel discussions, the report from the faculty Sustainability Task Force and Article 15 of the Collective Bargaining Agreement outlining faculty contracts and rights.

In totality, the task force has proposed the elimination of five majors, two programs, seven minors, one program freeze and one history concentration removal. For non-tenure track faculty, 15 departments have received deductions in full-time equivalents.

“All of us are frustrated and shocked, and more importantly we are not okay with it,” said senior earth science major Nicole Niskanen. “Granted, the times we are in are very challenging and it is understood that the university is not exclusive with the sacrifices it is making, because many other schools are in the same position.”

Niskanen explained that a lot of the cuts are impacting first-generation college students that are interested in pursuing degrees in science, technology, engineering and math.

“Western Oregon University is an affordable option for many first-generation college students, along with that, the campus prides itself on diversity and equality,” said Niskanen. “The Earth Science program at Western has a significant number of women and other individuals from diverse backgrounds and populations enrolled in the program including students with disabilities.”

According to Niskanen, eliminating the program strips away the opportunities for some of those underrepresented first-generation college students and deprives those who cannot afford to attend expensive STEM-focused universities.

“I am writing on behalf of all of the Earth Science students who have completed the program, who are currently trying to finish the program, and those who will complete the program; we don’t want to see any of our professors leave because they have done so much for us by dedicating their time to support us and by selflessly helping prepare each student for whatever career path they take. We want to fight for the program and fight for our educators,” said Niskanen.

Currently, faculty are working to try and save these programs. To advocate for programs or faculty jobs, students can go to the ASWOU site within Engage. From there, students can fill out the Student Concern Report.

Western has announced its final program curtailment enacted by Article 15, as well as non-tenure track layoffs outside of Article 15.

Under the article, the university is permitted to make reductions in cases of demonstrable financial need, discipline curtailment or retrenchment. As of now, Western is claiming financial strain due to COVID-19 and long-term decline in enrollment as the cause of enacting Article 15.

Since fall of 2011, Western’s enrollment has decreased over 25% from 6,217 to 4,552 in fall of 2020, as reported in the Article 15 Task Force’s finalized plans. Currently, under the Article 15 program curtailment plans, 14 full time positions will be lost, and a total of 10 majors and minors will be eliminated along with two masters programs. Outside of Article 15, a total of 16 full-time non-tenure tracks are being laid off.

“Quite frankly, our options for achieving a balanced budget are limited,” said President Rex Fuller in a letter to the campus community. “Given that more than 85% of our expenses are salary and benefits. With limited options for tuition increases, declining enrollment, and likely cuts to state funding, we must act decisively to align our budget with our fiscal reality.”

As of now, the impact of the program cuts will not impact students who are currently majoring or minoring in the program. In the letter, Fuller noted how important it is for students impacted by the program cuts to finish their degrees. According to the campus-wide letter, program curtailment will only impact incoming students starting in the 2021 to 2022 school year. Tenure-track and non-tenured positions will not be cut until deans and division heads submit final layoff decisions. The decisions are expected to be an ongoing discussion through the month of January.

Some members of Western’s faculty union — the WOU Federation of Teachers — are asking for program curtailment to be delayed until the new university president comes into office.

“We know that WOU is in some financial difficulties,” said WOUFT Communications Director Scott Beaver. “We just don’t want to rush, do long term solutions without due diligence.”

In an effort to advocate for faculty and departments WOUFT included some alternatives to department layoffs in the finalized plan, including moving Western out of Division II sports, looking for efficiencies in non-instructional office budget cuts and personnel assignments, reduce the number of campus sponsored events and used additional money from the fund balance.

The union at this time remains hopeful that there are departments that can be saved before layoff notices are issued. Beaver said the union is still fighting.