Does this look familiar?  All of our mobile electronic devices come with USB charging cables which inevitably break just below the connector due to the strain often resulting 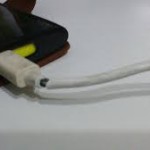 from plugging them into awkward-to-reach electrical plugs and by rolling them up for transport.  You can add electrical tape to cover the bare wires as a short term solution, but eventually the wires will break with use, and you will need to buy a new cable.  There are lots of cheap cables on the market, but if you have an Apple lightning cable you really need to make sure it is certified (MFI) if you want to ensure that it works properly and that can cost you $15 or more.  Ideally, what we need are cables that don’t break in the first place.

The Snakable cable may be the solution to this problem. 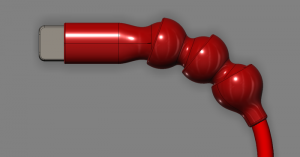 Integrated into this cable are several free-moving, ball bearing-like joints on both sides of the cable at each connector that restrict the cable from bending beyond its safe bending radius relieving strain where the cable enters the connector.   Snakable is a Kickstarter project so it is not yet available for purchase but has reached its $28.0000 goal and is due to be funded May 28, 2014 with expected product delivery in August.  The Snakable will be available in both lightning for iOS devices and micro USB for all other devices.  The 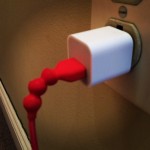 1.2 m cable is advertised as being constructed of a heavy-duty cable with an anti-tangling coating.  The cable will sell for $30, which while not inexpensive, is less than buying multiple replacement cables for your devices.  You can still get in on the backer deal until May 24 at $20 per cable.  The cable will come in black, white, red, orange and green.  Do remember that when you pledge to a Kickerstarter project, you are providing seed development money with the possibility that the product may never make it through the production stage.

I’ve never backed a Kickstarter project, but I might just give this one a shot going for a red cable since I travel a lot and have to replace cables all too often.

1 thought on “Snakable – a Solution to Broken Charging Cables?”