Update: a big thanks to Randy Klumph for video recording this session and to the NCDB for loaning their awesome video setup to the endeavor.  Thank you!

The due date for TRI promotion portfolios is right around the corner.  Presenting your portfolio online instead of in print has many rewards but can also be challenging. In this presentation I discuss how to analyze your content for online presentation, which tools are useful for getting your content on the web quickly in a visually compelling way, and the special considerations you should keep in mind before committing to an online portfolio.

Feel free to leave comments or questions at the end of this post and I’ll try to respond promptly. 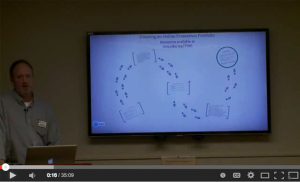 Here is the Prezi that accompanied my talk. I outline the steps required to prepare your portfolio and the tools used to create it.

Links to tools and examples.

Have fun, be creative!