I’ve officially been back in the United States for 21 days, and am so glad to be home with my loved ones. Before I get to that, let’s rewind to Peru, which was AMAZING. (However, it didn’t come without its battles and panic attacks) 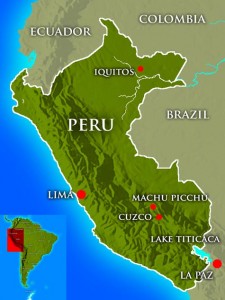 I left Quito on the 3rd for Lima, Peru and stayed overnight in the airport (and lived off Starbucks-I was really happy to see that place again). This is where I met up with my aunt Anna, who was told by her airlines that her bag never left Houston. She would be without it for at least three days (and during Machu Picchu).

In the morning I had a one hour flight to Cusco at 6 am, then needed a 20 minute taxi from Cusco to the Puyo train station for my 8:25 am train to Aguas Calientes. This is where me and my aunt would meet up with my friend Blake who had gotten into Cusco the day before. I immediately fell asleep on the plane as soon as I sat down. Unfortunately, when I woke up at 7 am, the plane was on the ground: it hadn’t even left yet. By this time my aunt was most likely in Cusco, by herself, looking for me, and neither one of us had a way to communicate without wifi. My plane landed at 8:05, giving me exactly 20 minutes to get through the airport, find my aunt, find a taxi, and make it to Puyo all before our train at 8:25 left. And believe it or not, we did it! It took some sprinting, and a really nice cab driver that took some interesting routes and wouldn’t let me stop for a bathroom, but as we ran up during the “last call” whistle, we were helped to our seats. And to Blake. 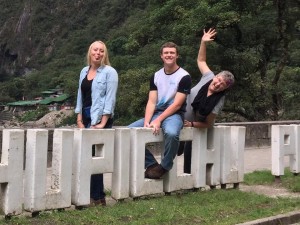 Aguas Calientes is the town at the base of Machu Pichhu, about a 20 minute bus ride from one of the Inca’s biggest secrets. The town was quaint and adorable, just as I had imagined. You were completely surrounded by mountains, pizza places, and little markets where everyone sold the same exact things, claiming they made it themselves.

Peru’s money is called Nuevo Soles (New Suns). One US dollar is about 3.4 soles at the moment. It was the first time I had used a different currency (Ecuador uses the US dollar), and it went a whole lot smoother than I expected.

There was a river filled with dark water (due to minerals) and massive rocks with amazing shapes to them. We think this was due to the water level previously being higher, sculpting the rocks. 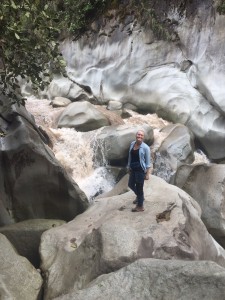 Peru’s famous drink is called Pisco Sour. It’s used with Peru’s own alcohol: Pisco, and it’s blended with egg whites. It’s actually pretty good. They also blend almost everything with egg whites, like lemonade. It gives a smooth, foamy texture- I loved it.

We got into Aguas Calientes around noon and spent the whole day exploring. After dinner we all settled down to try and get a good night’s sleep before waking up at 5 am for the early bus ride to Machu Pichhu. 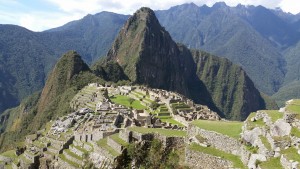 Which was better than I could have ever imagined.

We were there from 6 am to about 3:30 pm, and had a guide for the first 2 hours of the experience. The stone work, the architecture, the paths and bridges and trails, everything was amazing. 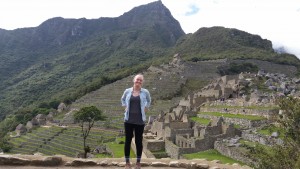 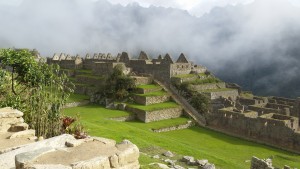 Even though it was a bit foggy in the morning, it quickly changed into a beautiful and warm day. If none of us were told it was Peru’s rainy season, I’m sure we all would have believed it was at least Spring. Even with putting on sunscreen twice, my neck was completely fried (not complaining, every second was worth it). 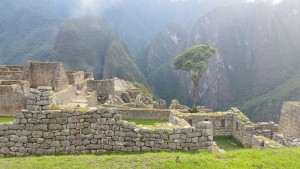 In the early afternoon we all went on an up hill hike to the Inca’s sun gate trail. There are a very few times in my life where I can say I felt that empowered. Once you make it to the sun gate you can look at Machu Picchu and realize you climbed above one of the world’s greatest wonders, and are now looking down on it. You’re standing on a trail that was used daily by an empire in the 1400’s. You’re surrounded by the Andes mountains. You realize you are so small but that specific moment is so huge. Nothing in my life has been more breath taking. 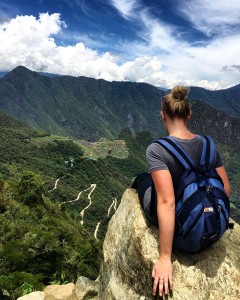 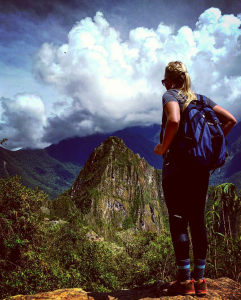 After a full day at Machu Picchu and another night in Aguas Calientes, we made our way back to Cusco. On the train we got to visit with fantastic people from all over the world — one of my most favorite things about traveling.

In Cusco we explored the city, bar hopped for the last time (until September!), and went to an artisan market. However, the NEXT day, we got to go an a four-wheeling tour around the Peruvian countryside, a beautiful lake, and Incan salt mines. 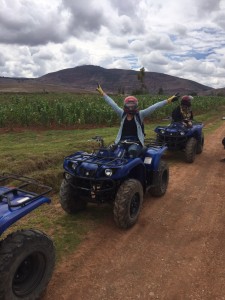 This was my first time on an ATV and even though it scared the crap out of me, I loved every second. It was a fantastic way to tour a country, especially when you want to cover a lot of ground in a short amount of time.

After four wheeling and dinner, it was time to get ready to go home. I had an 8 am flight to Quito and needed to be in a cab for the airport by 5 am. However, when that morning came about, everything went different than expected.

I was supposed to be boarding my flight at 7:40 and at 7:35 I didn’t have a gate number. By then I knew it would be delayed. What I didn’t know was that it would later be cancelled, and leave me stranded in the Cusco airport. The airlines were letting people from my canceled flight get on other flights to Lima if they had a chance of making their connecting flight — which I did. However, according the airlines, my flight back to Quito was full and therefor they wouldn’t give me a seat in another flight to Lima. When I asked when they’d be getting me back to Quito, they said the soonest flight they had available would be the next morning. This put me in full-out panic mode because my flight to the US was at 8 am the next day, and the airlines that were screwing everything up were not the airlines I’d be taking back home, which meant I wouldn’t be reimbursed for the three flights I’d miss.

After causing a huge scene I was offered a possibility that would get me to Quito by 1 am: Fly from Cusco Peru to Lima Peru, to Bogota Colombia, to Quito, Ecuador. With just enough time in the airport to have someone drop off my bags I’d left at Rosita’s, and take a quick nap. Then I’d wake up and go from Quito to Miami, Miami to LA, LA to Portland, and make the drive from Portland to home. So that’s exactly what I did.

I still dealt with more issues like delayed flights, the airlines printing me the wrong boarding passes, and throwing up on the plane from anxiety that I’d never get home or be able to sleep again. However, along the way I got to bond over my hatred for Avianca Airlines (NEVER USE THEM) with other passengers who were also screwed over, and meet more fantastic people from all over the world. One of the best parts: I got to have an hour long conversation in Spanish with a man next to me. At that point I realized I really had accomplished so many of my goals while in Ecuador, and I began to feel proud of myself for handling the whole experience the way I had.

After 50 straight hours of airplanes and airports, and stepping foot in 4 countries in 24 hours, I made it home to see my people. I got to take showers with hot water, hug my family, go on an actual date with my boyfriend, and go back to being vegetarian-which I missed a lot. Everything was as it should be.

Plus, the holidays is such a fantastic time to be getting to come back home. 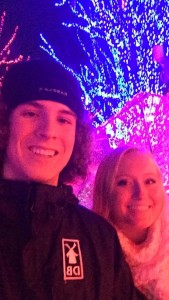 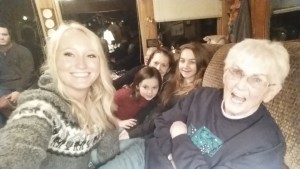 Now that it’s been a couple weeks I’d like to think that I’m fully readjusted to the United States, although it surprisingly wasn’t very hard to do so. I’d been warned that I’d have a difficult time getting used to things, but for me this wasn’t the case. I appreciate everything on a new level, but there was no huge reverse culture shock like I’d been expecting.

I’m now preparing to start winter term next week, and moving into my very first apartment with my friend Jamie! Although I’m so excited for whatever adventure is around the corner, I’m incredibly content with getting back into the routine of school, family, friends, and work. I missed the normalcy of home and it will be nice to enjoy it for a while.

Happy New Years everyone! Hopefully 2016 brings you as much happiness as 2015 brought me.