Not every week or day can be wonderful, in any situation, even while exploring abroad (so I just learned). I’m thankful to have my health, my loving friends and family, and all the opportunities that have been given to me. That being said, this week was kind of a let down.

Not all of it though! I went to the musical, which was interesting to watch and fun to experience. It was more of a theatrical choir maybe? Definitely something similar to what a college theater/musical group in Portland might come up with.

Then, we went to the soccer game! Which was super fun to watch and participate in! Ecuador won against Uruguay, even with three injured players, so as of right now we are in the number one spot for the world cup! 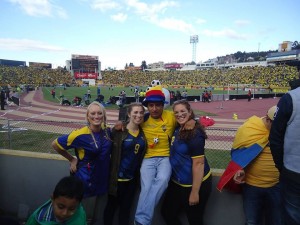 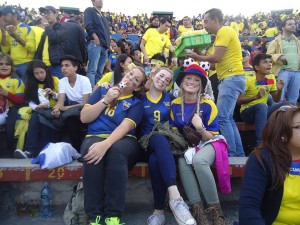 It was a lot less crazy than I expected. At least where we sat, it was a total family affair! We even made friends with the 4 year old boy in front of us, who decided he liked us so much that he would spend the whole game on our laps (especially Lauren’s, she seemed to be a fantastic human jungle gym). And of course the parents definitely didn’t mind getting a couple hours of alone time to watch the game, while we got our face paint poked at and Becca got her beer dumped. Haha

Speaking of snacks, tons of vendors walked around offering foods of all sorts. You didn’t even have to get up. So for $5.50 I got two epenadas, a big bag of popcorn, and like a 20 oz beer (still can’t bring myself to like that stuff–bleh).

On Thursday I also said goodbye to Doctor Palacio and the great people at the dermatology clinic. 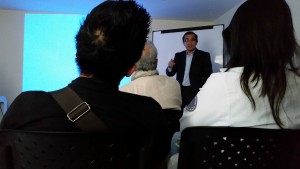 Every Thursday meeting is finished off with a fancy (and FREE) breakfast of fruit, yogurt, granola, bread and jam, eggs, coffee, tea, and some sort of sweet. So I pretended like it was more of a going away party for me 😉 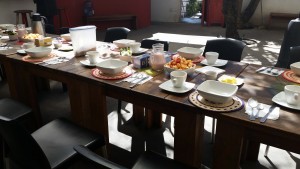 Unfortunately, this is where the great times seemed to end. On Friday the 13th the girls and I loaded onto a bus to Riobamba, a city about 4 hours South of Quito. Here we spent one of the scariest bus rides we’ve been on in Ecuador, and unfortunately passed fatalities on the road as we went by. These scenes were yet to be dealt with, so images of dead bodies on the road were in our minds as we swerved along to our destination.

One of the reasons we went to Riobamba was for a train that brings you around a boulder/mountain called the Devil’s Nose. When we went to buy tickets for the train later that day, we were told: 1) the price had gone up, and 2) there was construction, so the bus would ACTUALLY be departing from Alousi, a town 2 hours south, and the bus fair to get there was not included. We bought the tickets anyway, figuring we had already made the trip. At this point Becca’s brand new hiking boots had disappeared from her backpack as well, and we were not able to get any information from any of our bus or taxi drivers about their possible location. Maybe we should check eBay.

After a somewhat exhausting day, we got pizza at a little diner, which comfortingly turned out to be the best pizza I’ve had here (still nothing like the US). As we left the restaurant, it had gotten dark and we talked about going around to check out the night life of the city. However, in this short walk we all had begun to feel uneasy about our surroundings and the people paying attention to us on the streets. Not to mention passing a fatal car crash as we went for ice cream. And right as we decided to head back to the hotel instead, someone tried to pick-pocket me. Luckily, we have been on high alert since Lauren was robbed, and honestly he was just incredibly obvious, so he didn’t get too far before I caught on.

After what we thought was the ending to the terrible turn of events, we came back to our room to hear about the shootings in Paris. And by that time, I felt very defeated. I can’t even really explain the vulnerable feeling you get when something terrible like that happens in the world, and you are over 4000 miles away from all your loved ones. The entire world was hurting and being effected by this act of terrorism, and I couldn’t even hug my parents or my boyfriend. I’m going to be frank: it really sucked. We went to bed eager for the day to be over.

The next morning we went to Alousi, a town much cuter than I expected. 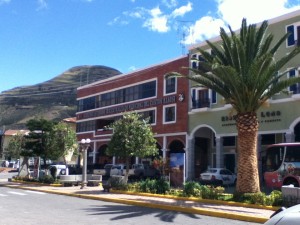 And here was where I got to take my first train ride ever (unless you count the mini train at Oak’s Amusement Park). 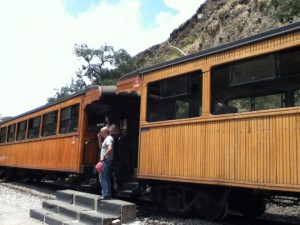 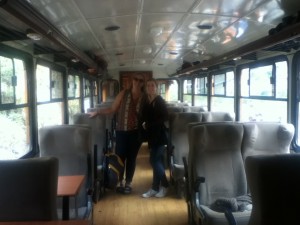 Which brings you on a 45 minute ride around Ecuador’s beautiful scenery, and then to the previously mentioned boulder/mountain, El Nariz Del Diablo: 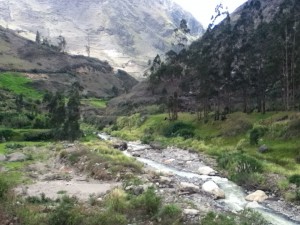 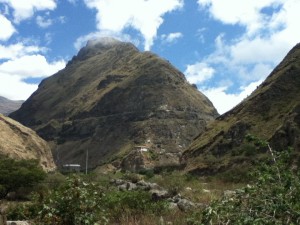 This outing went well, and was even accompanied by coconut ice cream. After heading back Riobamba we had dinner and a girls’ night in the hotel to try and make up for the last evening that didn’t go so well. By 6 am all of us were woken up by our neighbor vigorously hacking up something from his throat for at least 10 minutes. (Who needs an alarm clock when you have flem?)

Sunday we visited a town called Guano before making the trip home. Although small and not much of a tourist destination, I think it was worth visiting (However don’t come here if you’re interested in hearing a talented church chorus): 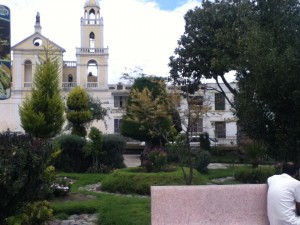 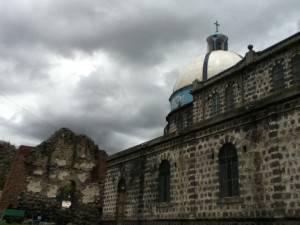 Leaving Riobamba we were thankfully some of the last people to secure seats on the bus to Quito. However, here we passed more death on the side of the road, and it was where Lauren’s seat partner tried to rob her while she was sleeping (we’re smarter than that now people, come on).

Next, in Quito, we took a city bus back home. This was where Becca dropped a copy of her passport, and intelligently, I reached my leg out to try and swipe up the passport with my foot. Unfortunately, this left my leg and a terrible position, and then the bus came to a screeching halt, which caused my knee to buckle and I got to feel what it was like to have your patella pop out of the socket and then right back into place. This is why I am sitting on my bed at 1 pm writing this blog post instead of scrubbing in on awesome surgeries. I’m still mad enough I really don’t want to go into more detail.

And lastly, as I crawled into bed thinking that this weekend couldn’t end any worse, I found out a former classmate of mine, who just graduated June 2015, was killed in a hiking accident in the Redwoods. My love and condolences go out to the friends and family of Henry Nittler. He was always so kind, and dedicated to so many different activities. He will be missed by the entire North Eugene High School community, I am sure.

Sadly, this is where the blog post ends. I am desperately hoping for a better week ahead: for me, my loved ones back home, and those suffering across the world. Tomorrow is a new day. And now, after getting all the ugly events off my chest, I’m going to try and look towards the positive and make an effort to end the bitterness I’m harboring. Bad things happen, so now I just can’t let it ruin the short experience I have left here.

Love and appreciate everyone so much, I really should say it more. 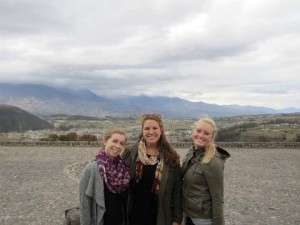