I can’t believe it has already been over a month in Ecuador.

I remember sitting on the couch December 30th, incredibly frustrated with myself that I had wanted to go abroad for as long as I could remember, yet I was 19 and hadn’t even been to Canada or Mexico. That was when I made my first ever New Year’s resolution: By January 2016 I wanted to at least have purchased plane tickets to a new country. And now look at me! I’ll have been in two other countries, another continent, a completely different hemisphere AND back home all before January. I’m not sure I could get any luckier.

Things are starting to settle down and feel normal here. The altitude doesn’t bother me, cultural differences don’t come across as shocking, the consistent chicken, rice, and soup for practically every meal is beginning to feel comforting, hearing everyone around me speak Spanish seems like second nature, and my routine feels as though it could really just be my every day life, like it doesn’t have an expiration date. It makes me sad to remember this is temporary, and by the end of this week my program will be half way over. (WHAT?)

The one thing that has yet to feel normal is the constant stomach issues. Last Wednesday I made my first (and hopefully last) trip to an Ecuador emergency room at 10 pm. It was my fourth time coming down with what seemed to be pretty severe food poisoning, but I also had some new symptoms that were a little nerve-wracking. Instead of sitting in pain, my roommates convinced me to go in and make sure it wasn’t something more severe, considering I have no idea what kind of sicknesses you can contract down here. 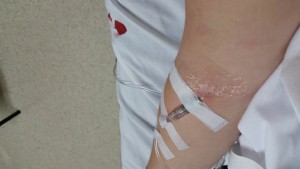 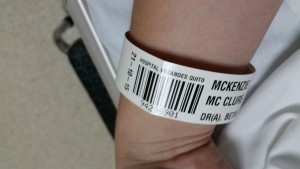 Sure enough, after 3 hours of sitting next to a screaming baby, an IV, some weak pain medicine, multiple med students taking turns squishing my stomach (which seemed more like having a contest of who could actually grab my intestines) I was sent home with antibiotics, pedialite, and the diagnoses of an intestinal infection from good ol’ street food. At least I got the reassurance that it was nothing worse, and got to observe an emergency room in a developing country from the patient’s perspective.

Everyone was incredibly nice, the tools/machines they used seemed outdated but were effective, and their techniques were interesting to watch. I even got to practice my Spanish by trying to explain my entire medical history with a very limited vocabulary. Thank goodness for Rosita – she makes every situation down right hilarious. Even when you’re sure your stomach is about to explode.

On Saturday we set off for one of Ecuador’s most famous lakes, which was voted the best hiking destination multiple years in a row online. 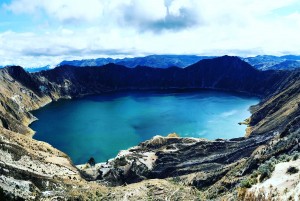 Reminding me very much of crater lake, only practically double its altitude at almost 13000 feet, this beautiful body of water was created by a collapsed volcano due to a massive eruption 800 years ago. Geologists claim it is around 250 meters deep (820 ft) but the Indigenous people of the village have a much more intriguing theory of it being bottomless.

This lake sits to the side of the Indigenous village, Quilotoa, home to about 50 families of native Ecuadorians. This is where we stayed for the night. 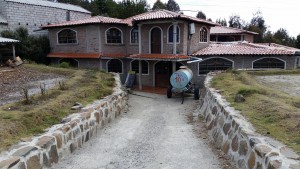 This was our hostel: Hosteria Alpaca. It was ran by an adorable family that for $17 gave you a room (with a fire place and queen beds), AND made you a home cooked communal dinner and breakfast, with tea by the fire downstairs whenever you felt like visiting with back packers who stopped by. 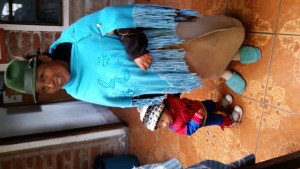 (sorry for the sideways picture. I have given up on trying to turn the darn things.)

This was the lady and one of her sons that ran the business constantly, no matter the hour. Their clothes were much more than just a fashion statement, they were completely necessary. It got SO cold. I made sure to pack my warmest clothes I brought with me, but they didn’t even begin to cut it. So the majority of our down time I spent by the fire, snuggling with the hostal kitty: 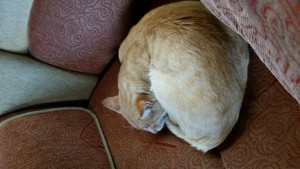 After each weekend I always say “now THAT is the prettiest place we’ve been to so far in Ecuador!” But this time, I REALLY mean it. The views were breath-taking. I could have watched that lake and the mountains forever and be completely content. The entire time I was there I kept thinking “there is no where else in the entire world I’d rather be right now.” Something just felt extra special on that mountain. 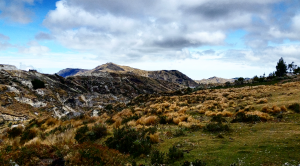 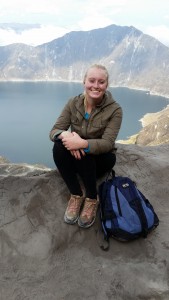 We got a late start to the steep hike on Saturday but it did not disappoint. On the way down I ended up rolling my ankle (multiple times–of course), but we had the companionship of stray dogs and cranky donkeys to keep us company. Speaking of 4 legged creatures, hikers have the option of riding horses back up the hill they likely slipped the majority of the way down. 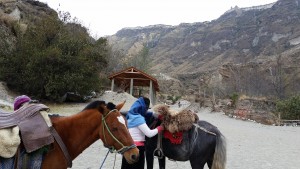 Now before you judge me, remember I had rolled my ankle, AND it was getting dark (I’m also pretty out of shape). So yes, I opted to take the horse back up for everyone’s benefit. My friend Becca did the same while Lauren and Kristina trekked their way back up. The good news is that the money we paid to ride the horses went towards a young girl’s education fund, with dreams of one day studying in Quito. How can you say no to that? 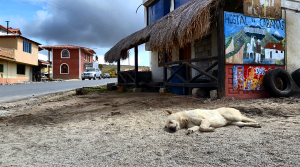 This is a picture of a dog (“perrito”) sleeping outside the village (I promise it was just sleeping). There are tons of dogs here for how tiny it is, but they seem very well cared for by the community, unlike other cities in Ecuador unfortunately. I saw a puppy husky mix and was trying to find ways to put it in my suitcase.

I actually calculated wrong and have one more week with the kids before moving onto clinical rotations. Which turned out to be nice since I was sick during what I thought was my last day. I’ve built a great connection with both the teacher and the kids, and I’m going to miss them a lot after I move onto the next phase of this program. I’ve been bringing bubbles (burbujas) and stickers to class every day, so the kids are behaving wonderfully, of course. I also took a bunch of videos of the kids singing and dancing, which I’m going to keep forever 🙂 so cute 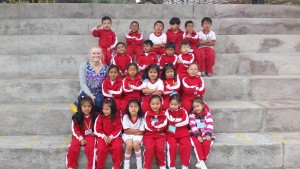 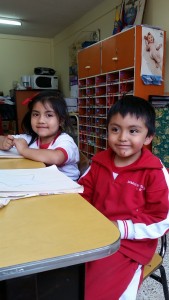 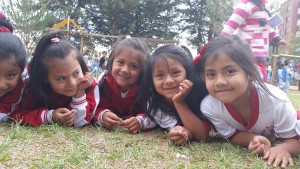 This weekend we get a nice long break due to back-to-back holidays. First, on Monday, it is The Day of the Dead (super excited about this. Look it up if you’ve never heard about it) and then Cuenca’s Independence day on Tuesday. So Friday-Tuesday we will be soaking up the sun on Ecuador’s coast line in the beautiful Montanita and Puerto Lopez beaches. 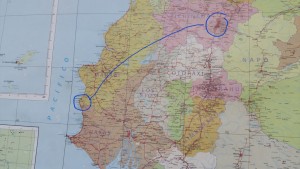 Unfortunately, this means a ten-twelve hour bus ride since the flights almost tripled in price due to the holiday. I’ve done the car trip from Eugene to LA so I’m hoping this will feel like a piece of cake. Especially once someone sees where we’re staying: 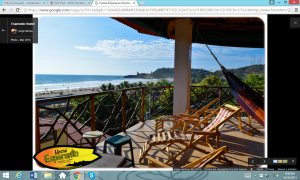 For a whole $20 a night too (about double what we normally pay for a three-four bed room). Waters are supposed to be 80 degrees and the beaches are known for their surfing and other water sports. Can someone say Parasailing?

I realized I hadn’t posted a picture of Marco or Angel, our Spanish teachers that we spend 15+ hours a week with, so here they are (on their side of course). 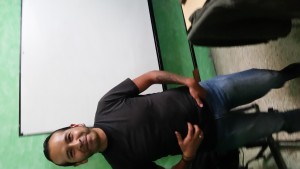 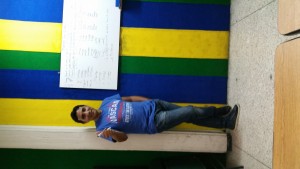 Since it’s 6 days until El Dia De Los Muertos, traditional holiday food is being sold/made everywhere. Today the preschool teacher, Juanita, brought in homemade guagua’s de pan (loaves of sweet bread frosted like babies in a blanket) and colada morada (a warm berry smoothie with cinnamon). Both were delicious. 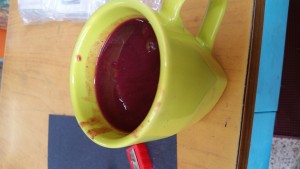 As much as I enjoy the food here, there are some things I really REALLY miss. Like Cheez-its, donuts, and burritos. What I would give for a dang burrito. You can’t find them anywhere down here, and if you do, they’re nothing like the ones in the US. I have a feeling the small amount of weight I lost while here will come right back on just in time for the holidays 😉 Totally worth it.

The weeks seem to be going by faster and faster, which stinks. Of course, I can’t wait to come home and see everyone I’ve missed, BUT I really love it here and don’t want the experience to end. I just have to make sure to live in the moment as much as possible I suppose.

Okay, that’s it until I come back from the coast! Chao 🙂