Even though only a week has passed, it feels like at least 3. Every day is so jam-packed that it’s hard to remember everything that has happened. Unfortunately, the reason I finally have the time to blog about my experiences is because at the moment I’m in bed with a stomach bug. It could have been the food, but I’ve had it since Sunday morning.

Thursday we went around La Ronda where I took pictures of the amazing architecture. We toured churches, got food, and went Salsa dancing. Shakira would probably be disappointed in my moves, but we had a lot of fun. There’s something liberating about trying new things in a new country…especially when you know the people here will probably never see you again so it really doesn’t matter if you look stupid 🙂 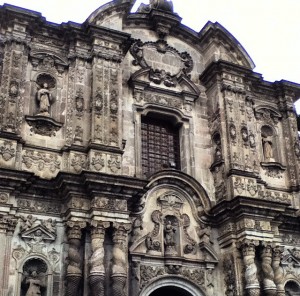 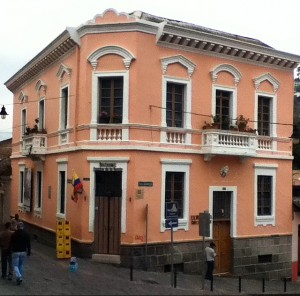 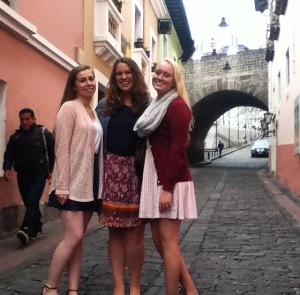 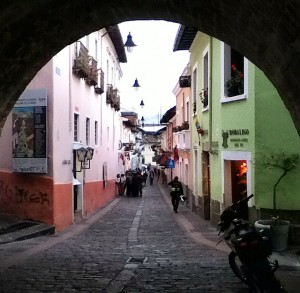 Also, this is not an elephant ear people. This is a giant empanada with cheese on the inside and sugar on the outside. And yes, I had hot chocolate too. 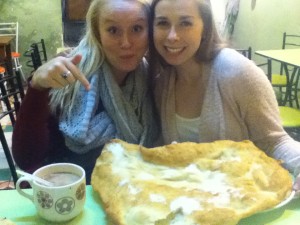 This weekend we traveled north of Quito to Otavalo, Cochasqui, Ibarra, and Cotocachi. (I’m not promising that those are spelled right).

First we stopped in Cochasqui, where we got to chill with some alpaca’s and see pre-incan ruins. We also stood at the highest point in the middle of the world, so you could say we were slightly out of breath.

Our guide spoke only in Spanish (obviously) so I didn’t pick up everything he was saying. But the trip was well worth while and I enjoyed witnessing remnants of a history so long ago. 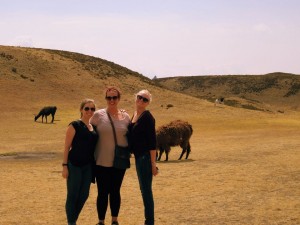 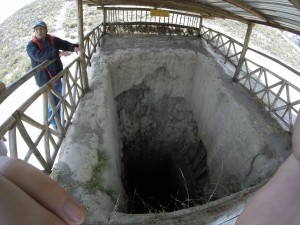 In Otavalo they have one of largest hand-crafts markets in South America. You can find everything from Alpaca fur scarves, blankets, and sweaters (alpacas are not harmed by the way), to jewelry, baked goods, pottery, instruments, paintings, etc.

It was here that I found out that I have a gift for haggling down prices in Spanish. I think this is due to me not understanding the majority of what they’re telling me, so I feel no pressure or guilt from requesting outrageously low prices. I also know I’ll be here a while, so I don’t feel pressured to buy anything that very moment because I know the opportunity will present itself again, and I have no problem walking away — which REALLY gets them to drop the price. 🙂 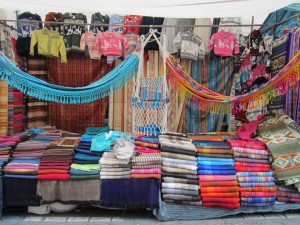 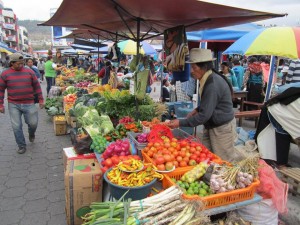 I ended up getting a handmade alpaca blanket for $11, a handmade alpaca sweater for $15, and a hand painted oil painting (just barely able to fit in my suitcase) for $25. I still have my eye on some painted bowls and a small vase that seems to be pretty common, but I’m holding out for a deal.

Otavalo also has an animal trade/market in the mornings, which I was able to go see. It wasn’t the easiest thing in the world, especially considering I JUST gave up vegetarianism (and plan on going back to that after I leave here), but it was a good experience to have. 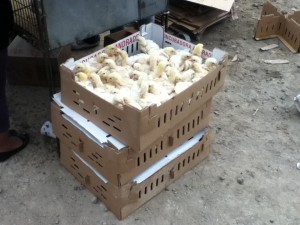 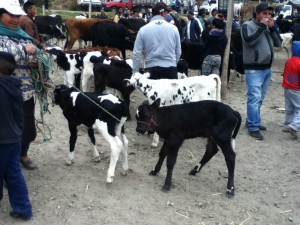 It was not uncommon to see animals tightly packed in small spaces, often sitting on top of each other. Most people were walking around with bags of live chickens (multiple in just one bag that is tied off without holes). This was somewhat uncomfortable because you could hear them squak and see the bag move. We also saw live pigs dragged by their feet.

I had to remind myself that the factory “farms” in the US are just as bad, if not worse, as far as treatment. And from what I can tell, most of these animals grew up in a healthy/nicer environment then the one they were presently being sold in. I don’t consider this a negative experience, just a learning opportunity. It would be hard to treat an animal as your pet if it was your livelihood or your dinner.

Otavalo and the surrounding areas were a good reminder of the poverty that many people face in this country. It was a bit of a reality check after visiting the beautiful streets of La Ronda with cathedrals filled from head to toe with real gold.

While in Otavalo, we visited a rescued bird sanctuary. There were amazing species to look at, and tons of owls, which I loved. There was also a fantastic view of the mountains that you’re continually surrounded by if you live pretty much anywhere in Ecuador. The tall mountains and beautiful cloud cover are a constant occurrence. 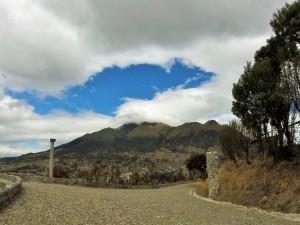 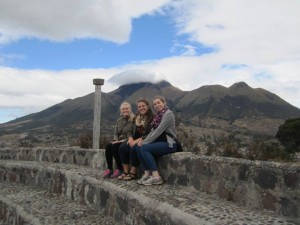 Oh, and as we left there were some random cows in the road. 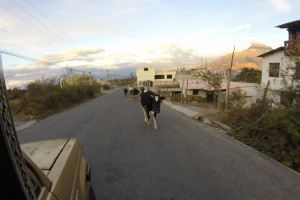 We also got to hike to a waterfall called the Cascada de Peguche. Here you could see lots of couples showing their affection (PDA is a much more common occurence here. These people just seem to be very passionate in general. I think its kinda cute). You could also crawl through tunnels made in the rocks (terrifying by the way) to little spots behind the waterfall that you wouldn’t be able to walk to. 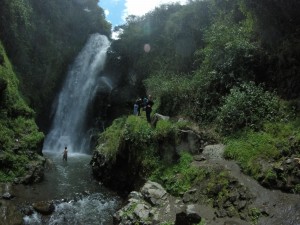 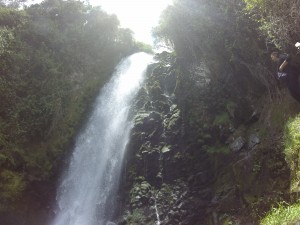 A few miles away we got to visit a stone solar calendar and a small market with food and crafts. So here is a picture of me, and not of the calendar or the food or crafts. haha woops. 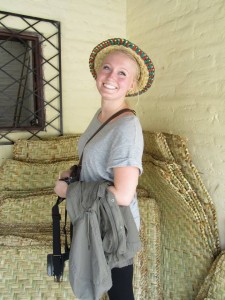 Yesterday, Monday the 5th, was the first day that we started work. I went to the preschool, Rebecca went to a women’s service clinic, and Lauren went to a dental office. (I’ll be going to the hospitals in 4 weeks)

While I was at the preschool there was some miscommunication with the teacher. As in, as soon as I got there she left me alone with the classroom of kids for the entire time. She didn’t even come back when class was over, and I had to send them off with people that I hope to goodness are their caregivers. Luckily, they had wifi so I could use a translator on my ipod if I needed to say something I was unsure of. The nice thing is, kids speak slower and have pretty simple sentences, so I understood them better than I do adults here. But if there was ever a time when I didn’t understand them, smiling and nodding did the trick. I think for the most part they were just telling me stories about siblings and pets 🙂 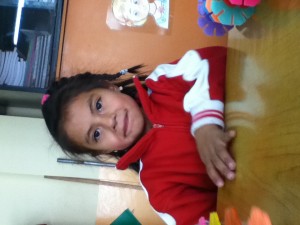 (sorry she is upside down, for some reason the pictures of the kiddos wont all turn)

Being on the playground with these kids is terrifying. First, they all wear the same uniform and are the same height and skin tone. And I didn’t know all their names. So trying to keep track of everyone was exhausting. Especially when the playground is 3 levels from the school being built on a hill. 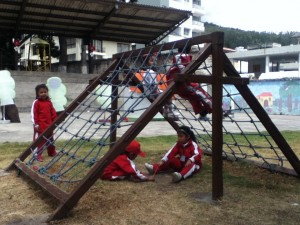 Second, the equipment on this playground I’m sure has long since been banned in the US. Old mary-go-rounds, rusty teeter-totters, wooden structures with nails sticking out. And third, the way they played almost gave me a heart attack. 3 students would lay on the slide while one up climbed over them (stepping on their backs) and another tried to slide down them (running into the one climbing up) and from what I can tell, the goal was to knock the other person OFF THE SLIDE. There’s no photo of this because I was too busy tearing my hair out.

When this kind of play was happening, I would look around to other students and teachers, who didn’t seem at all phased, or were doing the exact same thing. I made the decision to not step in, because I didn’t know if this was just a cultural difference. The US schools do tend to be extra paranoid, so maybe I’ve just been engrained like that. And maybe this kind of play is what creates the type of driving the adults seem to partake in here 😉

In the end, no one got hurt (not even a scratch–maybe we need to relax a little in the US), I shuffled them off to the bus or parents, and went on my way to Spanish class. After talking to my director about the teacher leaving, she called the lady and we got the situation straightened out. Today was MUCH better, but only for the hour that I was there…considering I slightly ruined the fun day by throwing up and having to go home…not sure how she explained that one.

-Money is not nearly as private of a matter here than it is in the US. It seems to be very casual to ask people what they make. I’m constantly asked by teachers or even cab drivers how much I’m paying to learn here. I just try and avoid the questions because I don’t want to put myself in a vulnerable position, seen as a wealthy American girl traveling alone in a foreign country. I’m sure they are just genuinely curious. However, the minimum wage here is like $1.50 an hour so I’m sure anything I told them would sound extravagant.

-Everyone is so relaxed. Like relaxed to the point that it gives me anxiety. Whenever I ask a question people laugh and go “tranquila” which basically means chill out. So I must come across very stressed. Haha but everyone is also very nice, warm, and welcoming. And if they don’t know an answer to your questions, they will try to find another way to help. (When I got sick out of town, the lady who managed the hostal we were staying in brought me a homemade electrolyte drink with lemon and sugar and salt and some other stuff. She even checked in on me. so sweet.

-All the advertisements are of white people. Most with light hair. Which I find to be just SO odd when literally no native here is remotely light skinned. It makes me sad that as humans we’re fixated on unreachable beauty standards. And it makes me even more sad that in a nation that is SO BEAUTIFUL, with gorgeous people, they’re constantly told through media that they need to idealize western culture/people and are pressured to be like them. Even the bathroom passes for the girls and boys in school had blonde-haired, blue-eyed children. I can’t imagine how it feels to be out-casted, even when you’re the majority!

That’s it for awhile, I’m going to try and sleep off this darn stomach bug. Chao from Ecuador! 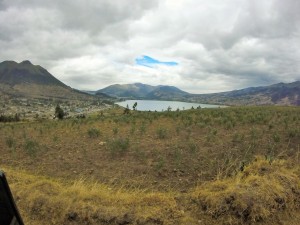 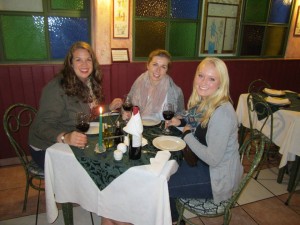