This last week in Argentina was incredibly hectic. All of my finals were on two days, so I slammed out two tests and turned in a term paper. While happy it was over, I found myself sad that I would  be leaving Argentina in the next week.

Also, Mat, his friend and I all had an adventure after finals on Thursday. We all got asado to go but realized there was no where to eat it seeing how it was 8:45 at night. So we hunkered down on a street corner and started to eat the best barbequed steak and chicken I have ever had. We had no silverware so it looked pretty silly. Half way through we realized people were giving us these dirty looks and then Mat and I remembered something. In class, that morning, our teacher told us it was culturally unacceptable to eat in the street. …But we still did it anyways.

It was made even more bittersweet in our final Spanish class. Five out of eight were there and we made sweets with the teachers. It was nice to just sit and talk, but also hard. The majority of my class is there for ten weeks and I had to deal with knowing I would probably never see them again. 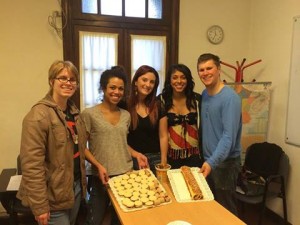 For our last day, we made dessert in Spanish. It was amazing.

However, they did offer for my 21st birthday this next year to head down to Eugene (where they all go to school) and will take me out drinking. It’s an on going joke with us that they’ll take me out for drinks because I don’t drink…

I’ll miss them, it’ll be hard to go to Spanish next year and not see them sitting there begging the teachers for how to ask where the toilet paper is… (this was the first thing we learned) 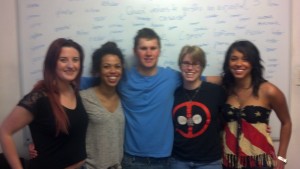 All of us together on our last day of class.

Following this we had the goodbye dinner. The majority of kids turned up and it was again wonderful but emotional. After spending ten weeks with the same 26 people, it’s hard to think that I probably won’t ever see them again… 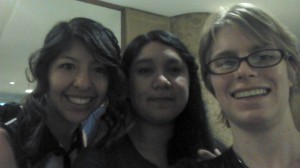 The goodbye dinner with my friends Isamar and Karina. 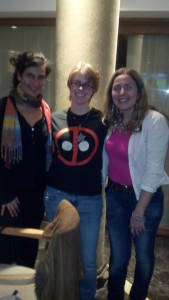 On the left is my Grammar teacher and the right is my Conversation teacher.

Of course this weekend was for hanging out with my friends. We celebrated Isamar’s birthday and watched the Peruvian Festival. It was fun, and I’m still trying to wrap my head around the fact that I won’t be here next week to see what’s happening at the river. 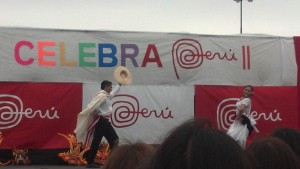 My last day was also fun. I hung out with Naomi and Karen, and two of Naomi’s friends came and met with us. It was a good group and we looked at the stalls and had fun walking by the river. Afterwards I headed home and picked up some flowers as a gift for my host mother.

Dinner tonight was another adventure. Monica was out with friends so around 8 I went to a restaurant I wanted to try and got some food to go. When I came home, Monica was there. Turns out she came home to cook me a pizza and wanted to know why I had bought this food. I of course, in my terrible Spanish, explain it was because I thought she was out eating with friends. I then declared the food a present and we split it. Tomorrow we’ll be eating the pizza for lunch, which I look forward to. 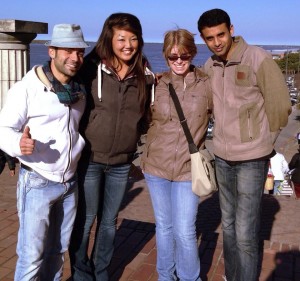 My last day in Rosario.