I finally arrived in Rosario, and what an adventure it was. I got to wake up at the lovely time of 5 o’clock am to get to the airport by 6. My flight was at 7 and I wanted plenty of time to get to my gate. My taxi driver, a sweet man who spoke limited English and indulged my terrible Spanish, escorted me to the check in line so I wouldn’t get lost. From there it was pretty easy. 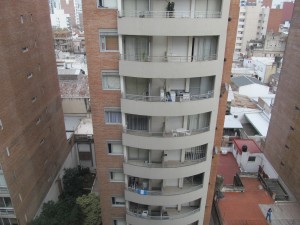 When I open up the window, this is what I get to see.

I got through security pretty well, the security officer just stared at me when I tried to take off my shoes like I was a very special snowflake. But still I managed and got into the waiting area. They loaded us onto a bus to take us to the plane, a tiny little thing, and I then proceeded to sleep through the entire flight. After I landed I took another taxi to the hotel, and again the driver was very nice. He kept asking me questions about California and I tried answering them as best I could but I think I just confused the poor man.

Everything worked out on the check in, and I went up to my room where I slept for about three hours before a girl from my program, Naomi, came in. We’re going to be sharing the room with one other person, Laney. After that, Naomi and I left the hotel with two other people and we went out for dinner at an upscale sports bar called Las Palmas. I split a sandwich with Michelle, something called chorizo which was delicious. Jason, the other person with us, wanted a beer but what came wasn’t a small bottle. No, this one was about the size of a liter of coke. 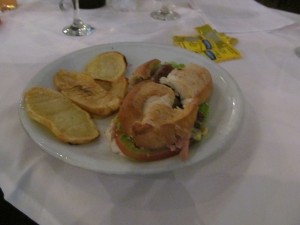 Dinner, chorizo, with the other study abroad kids. 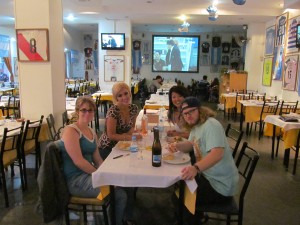 Dinner with everyone at Las Palmas.

The most exciting part of the meal wasn’t watching Mexico beat Croatia at soccer. It was when all of a sudden during the meal a parade walked by us. About fifty kids who looked to be in college with drums and signs, all chanting the same thing as they walked by. It was bizarre but really cool. Again, looking at the buildings around me is strange. Half of them are upscale and modern, while the others are old and slowly falling apart. The pavement looks alright from a distance, but it is broken up in a lot of places. Also, during our walk, we learned that dogs do their business on the sidewalk and the poo is left behind. 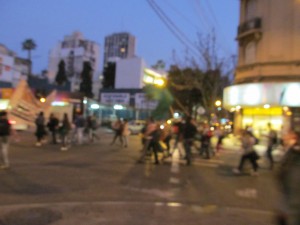 Random parade outside the restaurant.

Well, after lunch we returned to the hotel for a quick evening meal as we met the entire group for the first time. Little sandwiches and empanadas were out for us to eat as we talked to our future professors. My Spanish must have been up to their standards because none of them laughed in my face. Once the reception finished I went on a walk with Laney and two other girls. Isamar is from WOU and I think the other girl is named Lauren (not sure on that one). We went to the Argentinian Wallmart where I got shampoo and body wash before walking down the main avenue of the town. It was gorgeous surrounded by trees and beautiful buildings. We were out for about an hour, and during this I learned one important thing.

Argentinian’s have no fear when it comes to cars. People were running around the street, one guy nearly got hit. There were no turn signals, lot’s of honking, everything was really fast and the four of us just watched in a kind of horrified awe. It was a little terrifying. The strangest thing is that there was this one juggler we saw, who when the light turned red ran into the middle of the street and began to perform. When the light turned green the cars would go and he would run through the cars back to the street. It was one of the most bizarre things I have ever seen in my life. 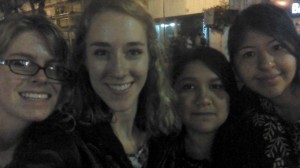 Taking a walk on the main avenue in Rosario.

Tomorrow I meet my host family and have orientation, so I’ll try to update after that.