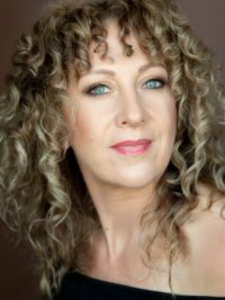 Lucy is a professional actor, writer and producer working on stage, screen and as a voiceover artist.  She grew up in Northern England training in Classical Theatre and Performing Arts and went on to study ‘Skill development through Shakespeare’ at the Royal Academy of Dramatic Arts in London. She performed in numerous productions throughout the U.K. and Canada and has worked with several Portland companies such as Artists Repertory Theatre, Portland Shakespeare Project, Imago, Post 5, Corrib, Lakewood and here at Valley Shakespeare company where she played Gertrude in ‘Hamlet’ (2019) and Maria in ‘Twelfth Night (2021).  She has appeared in various Films and TV shows such as ‘Grimm’, ‘The Librarians’ and ‘Portlandia’ and currently stars in the comedy YouTube series ‘KEPT News’ (keptnewspdx).   Lucy is a proud member of SAG-AFTRA (the Screen Actors Guild and the American Federation of Television and Radio Artists).