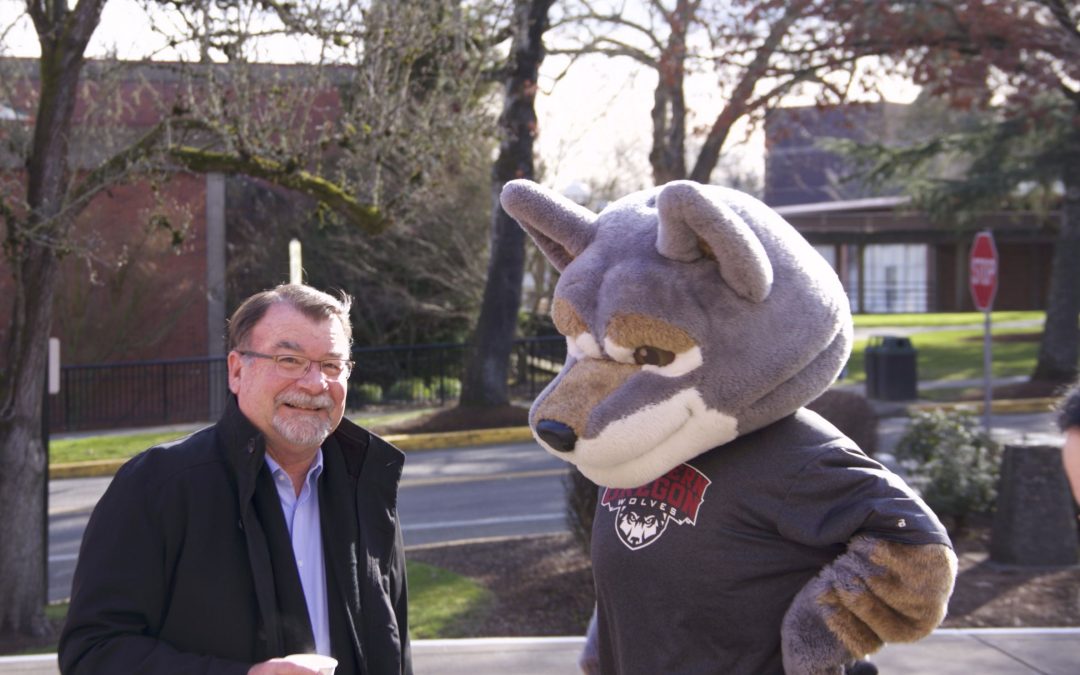 When you get to campus, you’ll quickly learn that we have our own set of vocabulary here. Whether it’s building nicknames or people, here are some of the WOU words you should know.

Wolfie: We are the WOU Wolves. Wolfie has been our nickname for the mascot since 1999, but his official name is Waldo Wolf. WOU became the Wolves in 1928, named after coach Larry Wolfe.

Rex: Our university president. You might be tempted to call him “Dr. Fuller,” but he really prefers simply “Rex.” He enjoys reading and tennis, and although he is a college administrator now, he’s also a trained economist. He and his wife, Susan, moved to Monmouth in 2015.

#HowlAboutIt: The official WOU hashtag. Find it on our Twitter and Facebook feeds, as well as those of our students.

Tree lighting: The giant sequoia on campus, which was planted in 1887, is adorned with lights for the holidays. The event joins the campus population with community members the last week of fall term (before finals). You may hear some people call it HTL.

Squirrels: The ubiquitous rascals are the school’s secondary mascot. They even have their own Facebook page: WOU Squirrels.

Monmouth and Independence: We’ve heard some people call the two towns “MoTown,” “IndyMouth” or “MI-Town” The university is located in Monmouth, but Independence is right next door.

WOU: The name is pronounced “woo” not spelled out W-O-U. Though, you may hear some people spell it out when it’s used in other acronyms like ASWOU (Associated Students of Western Oregon University).

Old P.E.: The older physical education building was constructed in 1936.

New P.E.: The new(er) physical education building was constructed in 1971. It carries this moniker even though it is more than 45 years old.

Rubber Room: The indoor baseball and softball facility in the New P.E. building goes by this nickname.

HSS: This is the former name for Bellamy Hall. It used to be called Humanities and Social Science, named after the two divisions in the building. Though that name has been gone for years, the acronym lives on.

Residence halls: This is what we like to call our “dorms.” Our on-campus housing is a space for living and learning, not just where you sleep at night. You may hear people call them “res halls” too.